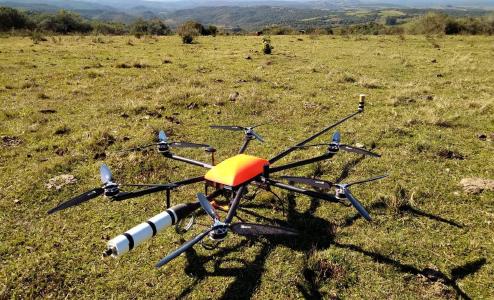 (PresseBox) ( Vancouver, B.C., 20-06-03 )
Ximen Mining Corp. (TSX.v: XIM) (FRA: 1XMA) (OTCQB: XXMMF) (the “Company” or “Ximen” - https://www.commodity-tv.com/ondemand/companies/profil/ximen-mining-corp/) is pleased to announce it is planning to conduct a drone-based magnetometer survey over part of its Brett property, near Vernon in south-central British Columbia.

A ground magnetic survey conducted in 2014 indicated The Main Zone is defined as a modest northwest-trending magnetic low anomaly, and the survey identified a broad magnetic low anomaly west of the Main Zone that extends west to the limits of the survey. This mag-low anomaly is associated with a zone of strongly altered Eocene volcanics with local quartz veining, and with elevated gold (and associated pathfinder elements) in rock and soils.  Additional magnetics surveying using a drone is going to be trialed on the property with the aim to extend this anomaly further to the west.

The Company also announces that it has divested its interests in the Gold Drop Property in southern British Columbia to GGX Gold Corp. Ximen will retain a 2.5% net smelter returns royalty which GGX Gold may buy down 1 per cent of the NSR royalty by paying $1 million. The Company has a meaningful share position in GGX Gold Corp. and wishes them success in realizing value from these properties for both Companies.