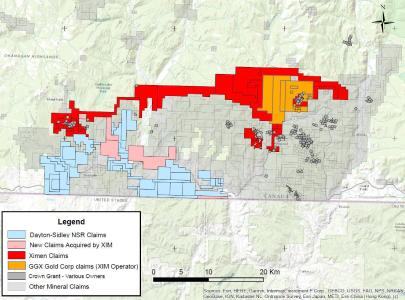 Ximen continues to add to its inventory of mineral assets in southern BC.  The most recent acquisition is a 2.5% Net Smelter Royalty (NSR) on 51 claims covering 15,116 hectares on mineral properties referred to as the Sidley Gold – Dayton Copper Properties.  The Sidley Gold – Dayton Copper Properties are owned by Grizzly Discoveries Inc. Also included with the NSR acquisition were five mineral claims covering 3,873 hectares as listed below. The NSR and properties were acquired from a private corporation for consideration of 800,000 shares of Ximen Mining Corp.

Ximen now owns and operates mineral properties covering approximately 19,000 hectares in addition to the recently acquired NSR in the Greenwood mining camp (see map).  An airborne VTEM and magnetics geophysical survey was recently completed over part of this area referred to as the Bud-Elk and Providence properties, which could result in new targets for drilling.