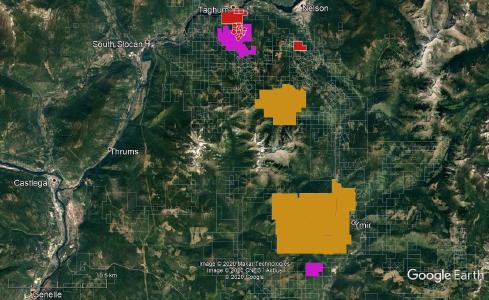 (PresseBox) ( Vancouver, B.C., 20-02-26 )
Ximen Mining Corp. (TSX.v: XIM) (FRA: 1XMA) (OTCQB: XXMMF) (the “Company” or “Ximen” - https://www.commodity-tv.com/ondemand/companies/profil/ximen-mining-corp/) announces that that it has entered into a Property Acquisition Agreement with Emgold Mining Corporation. (“Emgold”) for the purchase of 100% of the Stewart and Rozan properties, located near Nelson in southern British Columbia.  The two properties are located close to Ximen’s Kenville gold mine and consist of 60 mineral claims covering a total of 7,739 hectares.

Rozan is a 1,950 hectare property comprised of 32 claims, located 8 kilometers southeast of the Kenville Property.  Exploration by Emgold and others on Rozan had identified several gold targets and the mineralized structures found at the Kenville mine appear to trend southeast onto the Rozan Property.  Emgold completed 18 diamond drill holes totaling 1,906.8 metres that resulted in a number of significant gold intercepts.  Gold is associated with quartz sulphide veins and sheeted stockwork quartz veining.  Potential exists for both high grade vein and bulk disseminated gold mineralization.

Stewart is a 5,789 hectare property comprised of 28 claims and located 20 km south of the Kenville Property.  The Stewart Property has been explored for gold, molybdenum, base metals and tungsten and has known occurrences of gold, silver, molybdenum, and tungsten.  A total of 103 diamond drill holes totaling 13,737 metres have been drilled on the property, most of which targeted molybdenum and tungsten.  Significant intercepts were obtained for molybdenum and gold.  Potential exists for high grade vein and disseminated gold deposits, and for base metal deposits associated with porphyry intrusions and related breccia pipes.

Key points of the transaction include:
Dr. Mathew Ball, P.Geo., VP Exploration for Ximen Mining Corp. and a Qualified Person as defined by NI 43-101, approved the technical information contained in this News Release.