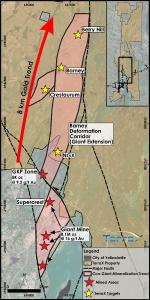 (PresseBox) ( Vancouver, B.C., 19-07-29 )
TerraX Minerals Inc. (TSX-V: TXR; Frankfurt: TX0; OTC Pink: TRXXF - https://www.commodity-tv.net/c/search_adv/?v=298857 ) is pleased to announce that the 2019 summer drill program continues at the Yellowknife City Gold (“YCG”) project. Phase 1 at Sam Otto South has been completed with approximately 1200m of drilling over 1km of strike extension. TerraX will return to Sam Otto South later this summer to follow up with more aggressive step out holes intended to build strike extension to the south for a total distance of 3km. This would represent a total strike length of 4km from Sam Otto Main to Sam Otto South.

Starting immediately, the drill will move to the Berry Hill zone within the Barney Deformation Corridor (BDC) and on trend with the North Giant Extension (Figure 1). Approximately 500 meters of diamond drilling will test a prospective zone based on surface sample results and positive historical data that accompanied historical core acquired in late 2018. The goal is to define a multi-kilometer long gold bearing system that trends north from the last known workings of the Giant mine at the GKP zone (Figure 1).

David Suda, President and CEO stated, “We are currently drilling one of the most exciting targets of the summer drill program. The opportunity at Berry Hill is the potential to define high grade gold structures trending from the North Giant extension (NGX) at the south end of the Barney Deformation Corridor for a distance of nearly 8km. Berry Hill is a significant test of the gold structures that hosted the Giant mine. Positive results would allow us to embark on a more fulsome campaign to understand the potential magnitude of this trend in the future.”

Upon completion of drilling at Berry Hill, TerraX will commence approximately 2500 meters drilling at the high grade Crestaurum target, including intersections into the Main Zone on two known hanging wall zones and on Crestaurum North (Shear 17). The company will announce more detailed plans in the coming weeks.

The technical information contained in this news release has been approved by Joseph Campbell, Executive Chairman of TerraX, who is a Qualified Person as defined in "National Instrument 43-101, Standards of Disclosure for Mineral Projects.

About the Yellowknife City Gold Project

The Yellowknife City Gold ("YCG") project encompasses 783 sq km of contiguous land immediately north, south and east of the City of Yellowknife in the Northwest Territories. Through a series of acquisitions, TerraX controls one of the six major high-grade gold camps in Canada. Being within 10 km of the City of Yellowknife, the YCG project is close to vital infrastructure, including all-season roads, air transportation, service providers, hydro-electric power and skilled tradespeople.

The YCG project lies on the prolific Yellowknife greenstone belt, covering 70 km of strike length along the main mineralized break in the Yellowknife gold district, including the southern and northern extensions of the shear system that hosted the high-grade Con and Giant gold mines. The project area contains multiple shears that are the recognized hosts for gold deposits in the Yellowknife gold district, with innumerable gold showings and recent high-grade drill results that serve to indicate the project's potential as a world-class gold district.

For more information on the YCG project, please visit our web site at www.terraxminerals.com.

On behalf of the Board of Directors

This news release contains forward-looking information, which involves known and unknown risks, uncertainties and other factors that may cause actual events to differ materially from current expectation. Important factors - including the availability of funds, the results of financing efforts, the completion of due diligence and the results of exploration activities - that could cause actual results to differ materially from the Company's expectations are disclosed in the Company's documents filed from time to time on SEDAR (see www.sedar.com). Forward-looking statements in this news release include, but are not limited to, statements regarding the use of proceeds from the Offering. Readers are cautioned not to place undue reliance on these forward-looking statements, which speak only as of the date of this news release. The company disclaims any intention or obligation, except to the extent required by law, to update or revise any forward-looking statements, whether as a result of new information, events or otherwise.