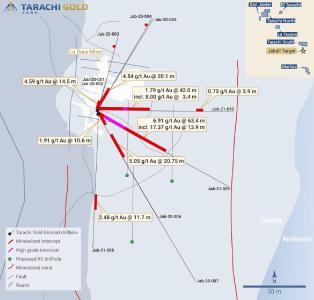 Tarachi VP of Exploration and Director, Lorne Warner, commented: “These results exceeded our expectations and confirm the continuation of gold mineralization down-dip towards the east. For an area containing historic underground mining, there has been little to no known drill testing of the down-dip and strike potential of this occurrence. We remain excited to continue unlocking the potential at Jabali and eagerly await the results of the surface RC holes that were recently completed south of the La Dura mine.”

Based on the drilling and mapping done to date, the Tarachi geology team believes the gold is hosted in a 10-20m thick panel of heavily silicified rhyodacite striking roughly north-south, dipping to the east at an approximate angle of 30o and plunging to the south at 25o. Higher grade gold mineralization is suspected to be concentrated within this panel in vertical zones or shoots running east-west. Hole JAB-21-09, which was drilled to the southeast, shows evidence of this with its multiple higher-grade subintervals including more than an ounce per tonne of gold over 5.6m.

The results from drill hole JAB-21-09 are very similar in both grade and length to last year’s channel sample across the north-south face of the underground workings which returned 6.34g/t Au over 62.55m and also contained many subintervals of 1 to 6m with grades between 7.4 and 55.2 g/t Au (see press release dated August 20th, 2020). Combined, the channel sampling and two rounds of drilling demonstrate a strike length of over 100m of high-grade mineralization that remains open along strike to the south and down dip to the east. The potential to find continuation of the mineralized zones to the west, on the other side of a fault found in the underground workings, is undetermined at this time. To the north, the unit appears to come to surface not far from the La Dura underground workings due to the unit’s plunge.

Hole JAB-21-10, drilled to the east, appears to have remained within the mineralized panel for a considerable length but likely did not intersect as many of the higher-grade east-west trending zones.

Hole JAB-21-08, drilled to the south at a dip of 30o, may have exited out the bottom of the main mineralized panel early on. The 11.7m intersection of 2.48g/t starting from 71.15m down the hole may represent the hole re-entering the main panel or possibly an additional mineralized structure that is parallel to and below the main panel. Deeper intercepts were also encountered in holes JAB-21-10, JAB-20-04 and JAB-20-06 (see press releases dated November 24th, 2020 and December 3rd, 2020). Drill hole JAB-20-06, drilled from the same pad at an azimuth of 150o and dip of 30o, intercepted 2.22g/t Au over 8.5m starting from 74m downhole. The RC surface drilling program is expected to provide greater clarity as to the true thickness of the panel as well as if there are additional parallel structures at depth or if the deeper intercepts are still part of the main mineralized panel.

The target panel has been found to be very poor in sulphide mineralization with only minor veinlets containing sulphides found in some holes. In the gold-rich intersections, iron averages less than 1%, sulphur less than 0.1%, copper less than 20ppm and lead about 60ppm. Silver values typically range between 1-5g/t.

Core samples were selected by a geologist and sawed in half. One half of the core remains in the core tray the other half is placed into a plastic bag. Sample tags were submitted into each bag before being sealed and stored at the campsite in a secure area and were later transported by company truck directly the Bureau Veritas Mineral Laboratories (BVM) in Hermosillo, Sonora, Mexico. At the laboratory, the samples were dried, crushed and pulverized with the pulps being sent airfreight for analysis to BVM in Vancouver, B.C. for 37-element ICP analysis after modified aqua regia digestion. Gold assays are done in Hermosillo by 50-gram fire assay with an atomic absorption spectroscopy finish.

Samples were checked using a 50-gram fire assay with a gravimetric finish for samples greater than 10ppm Au and 1Kg metallic fire assay with duplicate minus fraction analyzed. Both Hermosillo and Vancouver BVM facilities are ISO 9001 and ISO/IEC 17025 accredited.     Laboratory control samples comprising certified reference samples, duplicates and blank samples were inserted by the laboratory into the sample stream and analyzed as part of the quality assurance/quality control protocol.

Tarachi Gold is a Canadian-listed junior gold exploration company focused on exploring and developing projects in Mexico. The Company’s Tarachi project covers 3,708ha of highly prospective mineral concessions in the Sierra Madre gold belt of Sonora, Mexico in close proximity to Alamos Gold’s Mulatos mine and Agnico Eagle’s La India mine. Tarachi has also acquired the Magistral Mill and tailings project in Durango, Mexico. Magistral includes a 1,000 tpd mill and access to a tailings resource (non-compliant with NI 43-101) estimated to contain 1.3Mt at 2.05g/t Au which the Company expects to bring into production in 2022.

Lorne Warner, P.Geo, VP Exploration and Director of the Company is a qualified person as defined by National Instrument 43-101 and has reviewed and approved the scientific and technical disclosure in this news release.

This news release includes certain “Forward‐Looking Statements” within the meaning of the United States Private Securities Litigation Reform Act of 1995 and “forward‐looking information” under applicable Canadian securities laws. When used in this news release, the words “anticipate”, “believe”, “estimate”, “expect”, “target”, “plan”, “forecast”, “may”, “would”, “could”, “schedule” and similar words or expressions, identify forward‐looking statements or information. These forward‐looking statements or information relate to, among other things: future exploration programs, including the completion of drill holes; potential mineralization; and receipt of assay results.

Forward‐looking statements and forward‐looking information relating to any future mineral production, liquidity, enhanced value and capital markets profile of Tarachi, future growth potential for Tarachi and its business, and future exploration plans are based on management’s reasonable assumptions, estimates, expectations, analyses and opinions, which are based on management’s experience and perception of trends, current conditions and expected developments, and other factors that management believes are relevant and reasonable in the circumstances, but which may prove to be incorrect. Assumptions have been made regarding, among other things, the price of silver, gold and other metals; no escalation in the severity of the COVID-19 pandemic; costs of exploration and development; the estimated costs of development of exploration projects; Tarachi’s ability to operate in a safe and effective manner and its ability to obtain financing on reasonable terms.

These statements reflect Tarachi’s respective current views with respect to future events and are necessarily based upon a number of other assumptions and estimates that, while considered reasonable by management, are inherently subject to significant business, economic, competitive, political and social uncertainties and contingencies. Many factors, both known and unknown, could cause actual results, performance or achievements to be materially different from the results, performance or achievements that are or may be expressed or implied by such forward‐looking statements or forward-looking information and Tarachi has made assumptions and estimates based on or related to many of these factors. Such factors include, without limitation: the Company's dependence on one mineral project; precious metals price volatility; risks associated with the conduct of the Company's mining activities in Mexico; regulatory, consent or permitting delays; risks relating to reliance on the Company's management team and outside contractors; risks regarding mineral resources and reserves; the Company's inability to obtain insurance to cover all risks, on a commercially reasonable basis or at all; currency fluctuations; risks regarding the failure to generate sufficient cash flow from operations; risks relating to project financing and equity issuances; risks and unknowns inherent in all mining projects, including the inaccuracy of reserves and resources, metallurgical recoveries and capital and operating costs of such projects; contests over title to properties, particularly title to undeveloped properties; laws and regulations governing the environment, health and safety; the ability of the communities in which the Company operates to manage and cope with the implications of COVID-19; the economic and financial implications of COVID-19 to the Company; operating or technical difficulties in connection with mining or development activities; employee relations, labour unrest or unavailability; the Company's interactions with surrounding communities and artisanal miners; the Company's ability to successfully integrate acquired assets; the speculative nature of exploration and development, including the risks of diminishing quantities or grades of reserves; stock market volatility; conflicts of interest among certain directors and officers; lack of liquidity for shareholders of the Company; litigation risk; and the factors identified under the caption “Risk Factors” in Tarachi's management discussion and analysis. Readers are cautioned against attributing undue certainty to forward‐looking statements or forward-looking information. Although Tarachi has attempted to identify important factors that could cause actual results to differ materially, there may be other factors that cause results not to be anticipated, estimated or intended. Tarachi does not intend, and does not assume any obligation, to update these forward‐looking statements or forward-looking information to reflect changes in assumptions or changes in circumstances or any other events affecting such statements or information, other than as required by applicable law.