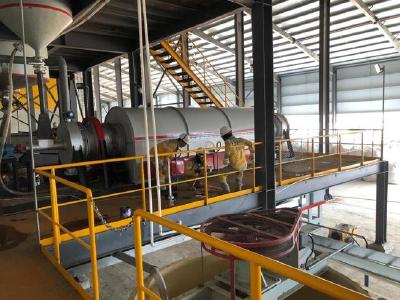 The Company is pleased to announce that it has completed the heap leach development at its 100%-owned Altan Tsaagan Ovoo Gold Project.

Internal commissioning of the ADR plant has been satisfactorily completed and the Company is now awaiting final cyanide permits before commencement of irrigation and gold production.

Key recent milestones are set out below:
The Company has been trial mining at ATO since November 2018 and completed Phase I mining in the Spring with 230,000 tonnes mined at a grade of 2.3g/t gold for approximately 17,000oz of gold. This has been crushed and stacked on Cell 1 of the leach pad with leaching ready to commence. Mining is set to recommence prior to the commencement of leaching. The Company expects to produce approximately 40,000oz of gold per annum in the initial years of production from the heap leach operation before the expected transition to an expanded circa 150,000oz per annum fresh rock crush and grind CIL operation, which is currently subject to a new feasibility study.

The Company has three diamond core exploration drilling rigs on site at the ATO project and drilling will focus on resource extensions at ATO1 and ATO4 as well as the high-grade gold discoveries at Mungu.

With respect to the previously announced private placement (the “Offering”) of 10% two-year unsecured convertible debentures (“Debentures”), as a result of higher investor interest, the Company now intends to accommodate additional orders in an upsized further tranche of US$3.0 million, to close following receipt of shareholder and regulatory approvals.

The Offering is now projected to raise aggregate gross proceeds of US$8.4m in Debentures.

A Special Meeting of Shareholders has been set for August 23, 2019 to approve this second tranche.

“We are very pleased to complete our internal commissioning at the ADR plant, and now await the final cyanide permits after which we will commence irrigation and gold production” said Matthew Wood, Chairman of the Company. “We have built a high-quality heap leach development in around 12 months, and we are excited to see gold production shortly. We are particularly grateful to our team and our strategic and government partners.  Our oversubscribed debenture offering is further evidence of the support for the team at Steppe Gold and the quality of our assets.”