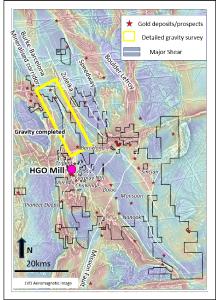 -The new structure extends for approximately 5 km, and runs sub-parallel to the major regional Zuleika, Speedway and Boulder Lefroy shears which controls the bulk of the gold mineralisation between the Golden Mile (60 Mozs).and Norseman (6 Mozs) mining centres.

-The new structure is located 5 km north of the previously mined 1.0 Moz Trident underground mine and the HGO mill.

- The Company will look to fast track exploration in this area as part of its expanded exploration focus at HGO.
- Approval for Baloo Stage 2 has been received from the Department of Mines, Industry Regulation and Safety, with mining expected to commence mid-2020 and extend to January 2021.

RNC Minerals (TSX: RNX) ("RNC" or the “Company" - https://www.commodity-tv.com/play/rnc-minerals-increasing-gold-production-up-to-110k000-oz-in-2020/ ) is pleased to announce the results of a recently completed high density gravity survey program at Higginsville. The program has identified a newly interpreted structure extending over 5 km north of the previously mined high grade 1.0Moz Trident gold deposit. The new structure is considered to have high potential for mineralization at depth and will be the focus of a new round of drilling by RNC as part of its 2020 exploration program.

RNC is also pleased to announce that Stage 2 of the Baloo open pit has been approved by the Department of Mines, Industry Regulation and Safety. Baloo Stage 1 was originally forecast to be completed at the end of January, however recent grade control and extensional drilling has extended Baloo Stage 1 until June 2020. Baloo Stage 2 will begin upon completion of Stage 1, notwithstanding the potential for further additions to the Stage 1 mine plan.

Paul Andre Huet, Chairman & CEO, commented: “Although early stage, our interpretation of the potential size of this new structure is an exciting development for our HGO-focused exploration activities. With the Morgan Stanley Royalty recently renegotiated in December 2019, it now makes sense to explore these and many other areas across the Higginsville tenement package which holds strong potential for new discoveries.

While exploration begins in earnest at HGO, production remains on target at both our operations. Considering that both Baloo Stage 1 and 2 pits were initially expected to be completed by mid-2020, the extension of Baloo out to early 2021 is a testament to the quality of the open pit opportunities at Higginsville. We expect the extended Baloo life to provide the additional production and mining flexibility that comes from operating two open pits over the course of this year.”

As part of the renewed focus on exploration at Higginsville, a high density gravity survey was conducted over a 60 km2 area covering a 5km strike distance north of the previously mined 1.0 Moz Trident gold deposit and HGO mill. The survey area had previously been the focus of reconnaissance aircore drilling and limited bedrock drilling as part of a regional approach by previous owners. However, following the renegotiation of the Morgan Stanley royalty, exploration re-commenced in this area and the survey was conducted. The aim of the survey was to define both shear-hosted and paleochannel structures on 200 m X 100 m line spacings. The survey (see Figure 1) was conducted in December, 2019.

Results from the gravity survey highlight a new 5km long north-south structure (see Figure 2) interpreted to be a splay off the main Burke-Barcelona mineralised shear which lies parallel and west of the regionally significant Zuleika Shear. The new gravity defined structure, combined with historical shallow aircore drilling (including a best intersection of 4 m of 1.7 g/t in HIGA157, from 16m), highlights the prospectivity of the full 5 km length of the structure and enhances the potential for mineralisation at depth.

Follow-up RC bedrock drilling is planned to test the newly interpreted structure at depth for primary mineralisation as part of HGO’s 2020 exploration plans.

On 24th January 2020, RNC received notice from the Department of Mines, Industry Regulation and Safety that mining of Baloo Stage 2 has been approved.

Mining of the second stage will follow completion of Stage 1 which is currently scheduled for late June 2020, notwithstanding the potential for further mineralization discoveries within the Stage 1 mining area. To date, grade control and resource definition drilling has continued to add additional expected production to the Stage 1 mine schedule.

As part of the HGO open pit “production pipeline”, it is expected that Baloo Stage 1 and 2 will be mined in conjunction with a series of additional open pits commencing with Fairplay North and Pioneer (mining at the former has already begun).  Additional resource definition and grade control drilling is underway in a number of other areas to continue to define the pipeline of open pits.

The disclosure of scientific and technical information contained in this news release has been reviewed and approved by Stephen Devlin, FAusIMM, Vice-President, VP Exploration & Growth, Salt Lake Mining Pty Ltd, a 100% owned subsidiary of RNC, a Qualified Person for the purposes of NI 43-101.

About the Gravity Survey

The gravity survey was designed to cover the Burke-Barcelona mineralised corridor north of the Higginsville mill. Data collection was undertaken by Atlas Geophysics Pty Ltd on a 200m by 100m grid using a Scintrex CG-5 gravity meter. The gravity data were reduced to the sea-level datum by standard reductions (Tide, drift, height, temperature, pressure, tilt, free air, and bouguer corrections) using a bouguer density of 2.67 g/cm3 to reflect the underlying geology. The collected data was processed by Resource Potentials Pty Ltd. The image presented in this announcement is a bouguer anomaly-2.67-1VD image with an underlying regional gravity colour over aeromagnetics.

RNC is focused on growing gold production and reducing costs at its integrated Beta Hunt Gold Mine and Higginsville Gold Operations ("HGO") in Western Australia. The Higginsville treatment facility is a low-cost 1.4 Mtpa processing plant which is fed at capacity from RNC's underground Beta Hunt mine and open pit Higginsville mine. At Beta Hunt, a robust gold mineral resource and reserve is hosted in multiple gold shears, with gold intersections along a 4 km strike length remaining open in multiple directions. HGO has a substantial historical gold resource and highly prospective land package totaling approximately 1,800 square kilometers. In addition, RNC has a 28% interest in a nickel joint venture that owns the Dumont Nickel-Cobalt Project located in the Abitibi region of Quebec. Dumont contains the second largest nickel reserve and ninth largest cobalt reserve in the world. RNC has a strong Board and management team focused on delivering shareholder value. RNC's common shares trade on the TSX under the symbol RNX. RNC shares also trade on the OTCQX market under the symbol RNKLF.

This news release contains "forward-looking information" including without limitation statements relating to the liquidity and capital resources of RNC, production guidance and the potential of the Beta Hunt Mine, Higginsville Gold Operation and Dumont Nickel Project.

Forward-looking statements involve known and unknown risks, uncertainties and other factors which may cause the actual results, performance or achievements of RNC to be materially different from any future results, performance or achievements expressed or implied by the forward-looking statements. Factors that could affect the outcome include, among others: future prices and the supply of metals; the results of drilling; inability to raise the money necessary to incur the expenditures required to retain and advance the properties; environmental liabilities (known and unknown); general business, economic, competitive, political and social uncertainties; results of exploration programs; accidents, labour disputes and other risks of the mining industry; political instability, terrorism, insurrection or war; or delays in obtaining governmental approvals, projected cash operating costs, failure to obtain regulatory or shareholder approvals. For a more detailed discussion of such risks and other factors that could cause actual results to differ materially from those expressed or implied by such forward-looking statements, refer to RNC's filings with Canadian securities regulators, including the most recent Annual Information Form, available on SEDAR at www.sedar.com.

Cautionary Statement Regarding the Beta Hunt Mine and Higginsville

The decision to produce at the Beta Hunt Mine was not based on a feasibility study of mineral reserves, demonstrating economic and technical viability, and, as a result, there may be an increased uncertainty of achieving any particular level of recovery of minerals or the cost of such recovery, which include increased risks associated with developing a commercially mineable deposit. Historically, such projects have a much higher risk of economic and technical failure. There is no guarantee that anticipated production costs will be achieved. Failure to achieve the anticipated production costs would have a material adverse impact on SLM’s cash flow and future profitability. Readers are cautioned that there is increased uncertainty and higher risk of economic and technical failure associated with such production decisions. It is further cautioned that mineral resources are not mineral reserves and do not have demonstrated economic viability.

A production decision at the Higginsville gold operations was made by previous operators of the mine, prior to the completion of the acquisition of the Higginsville gold operations by RNC and RNC made a decision to continue production subsequent to the acquisition. This decision by RNC to continue production and, to the knowledge of RNC, the prior production decision were not based on a feasibility study of mineral reserves, demonstrating economic and technical viability, and, as a result, there may be an increased uncertainty of achieving any particular level of recovery of minerals or the cost of such recovery, which include increased risks associated with developing a commercially mineable deposit. Historically, such projects have a much higher risk of economic and technical failure. There is no guarantee that anticipated production costs will be achieved. Failure to achieve the anticipated production costs would have a material adverse impact on the Corporation’s cash flow and future profitability. Readers are cautioned that there is increased uncertainty and higher risk of economic and technical failure associated with such production decisions.