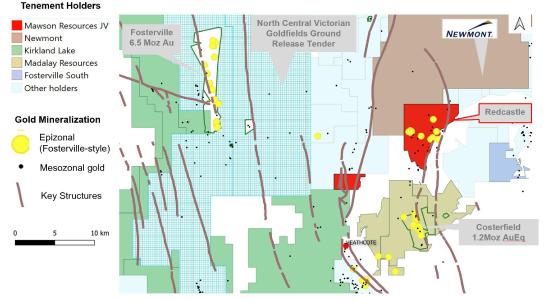 - Redcastle is one of the most significant historic epizonal high-grade goldfields in Victoria, Australia:
- Redcastle is the first mined of three historic central Victorian goldfields. Mining at the nearby Costerfield and Fosterville began later in ca. 1860s and 1890s respectively (Figure 1); Extremely high gold grades were mined over a 4.5 x 7 square kilometre area containing over 24 historic mining areas (Figure 2), including:
- Redcastle has never been drill tested beneath any of the historic high-grade mining areas:
- Mawson will commence geophysics at Redcastle during July, followed by a diamond drilling program in late August/early September;
Mr. Hudson, Chairman and CEO, states, “In the search for the next Fosterville, it is important to understand the two distinct sub-types of orogenic gold mineralization in Victoria, formed during different metallogenic/orogenic events that occur in distinct regional geological domains. Redcastle, like Fosterville and Costerfield, as well as our 100%-owned Sunday Creek project, contain epizonal styles of mineralization.

During the last half of the 1800s, Redcastle produced at astonishingly high grades from multiple arrays of thin quartz-stibnite veins. For example, Clarke’s Reef belonging to the Welcome Group of mines mined 60.9 tonnes of quartz for 969 oz @ 446 g/t gold within a year of its discovery in 1860, and went on to produce 20,583oz @ 254.6 g/t gold in the six years from 1859 - 1865. Individual mines extended over many kilometres, with the combined strike length of the then known lines-of-lode in Mawson’s joint-venture tenure exceeding 17 kilometres. These high-grade mines were mined to an average depth of only 50 metres (with no mine deeper than 125 metres) due mainly to the lack of pumping technology required to mine below the water table. As a result, mine records indicate that high-grade gold was “left underfoot” in most mines, due to groundwater inflow exceeding pumping technology of the day to facilitate mining deeper. We look forward to providing further detailed information on these historic mines shortly.

The Redcastle area has been continuously under tenure since 1985. Drilling has never tested for continuation of the free-gold and high-grade reefs below any of the Redcastle mines. The average drill hole depth in the Redcastle tenement is 38 metres (the deepest being 81 metres, with no diamond drilling). No systematic geophysical surveys have ever been undertaken. In 1885 Forbes and Murray wrote “it seems incredible that such a field should have been left so long neglected”. That statement, incredibly, still holds true today.

At Redcastle, Mawson plans to start geophysical surveys (induced polarization, gravity and ground magnetics) to understand the broad geological system in the coming weeks with a drill rig ready to mobilize from late August/early September. We are extremely excited to be the first group in 120 years to test the high-grade search space below the visible gold in quartz veins exploited by the old-timers.”

Victoria hosts one of the giant orogenic goldfields in the world with more than 80 Moz extracted since 1851. The State is now experiencing its third gold boom with the discovery of the Swan Zone at Fosterville (current proven and probable reserve 3 Mt @ 21.8 g/t gold for 2.1 Moz). There are two distinct sub-types of orogenic gold mineralization in Victoria (mesozonal and epizonal), formed during different metallogenic/orogenic events: the first recorded from the ~445 Ma Benambran Orogeny, and the second from the ~370-380 Ma Tabberabberan Orogeny occurring within distinct regional geological domains. The majority of gold recovered from the Victorian goldfields has been produced from the older, Benambran-aged mesozonal gold-quartz vein systems, targeted by the old-timers in the Bendigo and Stawell zones. More recently, Fosterville has rewritten the Victorian geological opportunity for epizonal gold deposits. We now understand that epizonal systems can develop extremely high-grade, free gold deposits, as the miners in 1859 demonstrated at Redcastle.

These goldfields straddle the crustal-scale Heathcote/Mt William Fault Zone, thought to represent the buried margin of the Proterozoic-aged Selwyn Block, with mineralization-ages of all three deposits considered late-Tabberabberan in age. The majority of the Redcastle tenement is held within State Forest, while the northern margin of the claim surrounded by a Newmont Corporation exploration tenement. During the 1800s the average mining width was one metre in quartz veins containing visible gold (individual reef widths were often less than 0.6 metres). The combined length of workings are 17 kilometres with several reef systems extending for kilometres including Welcome (2,000 metres) and Why-Not (2,000 metres). Spurs splaying off the main reef systems were recorded to have been worked for distances between 15-33 metres. It is a characteristic of Redcastle that reefs are closely spaced. On the western side of the field, 14 reefs are recorded to occur in a cross-strike distance of 900 metres.

The first modern exploration at Redcastle took place in 1985, and since then, explorers have exclusively focused on heap leachable near-surface gold at Redcastle, but never for high-grade gold beneath and along strike from existing mines. Apart from a ground magnetic survey in 1988 on a 400 metre by 40 metre grid, no systematic geophysical coverage of any type has been undertaken at Redcastle. A total of 270 very shallow reverse circulation (“RC”) and rotary airblast (“RAB”) drill holes have been drilled at Redcastle since 1985. The deepest hole is 81 metres and average drill hole depth is 38 metres. All drilling tested for low grade halos around old workings. None tested for high grade extensions below the high-grade gold mines. Selected drill results from these shallow holes marginal to the high-grade mines include: 10 metres at 2.5  g/t gold from 22 metres (RRC26), 2 metres at 10.7  g/t gold from 39 metres (RRC41) and 2 metres at 6.3  g/t gold from 26 metres (PR16). None of the drill data have been independently verified at this time. The true thickness of the mineralized intervals is not known at this stage. Significant soil, rockchip and costean sampling have taken place on the project. All mining areas are within areas of outcrop, however approximately 50% of the tenement area lies under thin cover within extensive gullies.

Mawson plans a twofold approach at Redcastle. Initially the Company will systematically collect “tenement scale” data to understand the broad mineral system and allow it to also explore beneath the significant alluvial cover. This includes ground magnetics, gravity and gradient array induced polarization (”IP”) to test the entire Redcastle mineralizing system. Secondly the company plans to start drilling from late August 2020, to test beneath the high-grade old mines by combining the “tenement scale” data with dipole-dipole IP and detailed analysis of historic mine records. A geophysical contractor will mobilize to site during July, followed by a drill contractor from late August, 2020.

Mawson has the option to earn an up to 70% joint venture interest in the Redcastle project from Nagambie Resources Ltd (ASX:NAG) (“Nagambie”) by incurring the following exploration expenditures: A$100,000 in the first year and an additional A$150,000 in year 2 to earn 25%, an additional A$250,000 in year 3 to earn 50% and an additional A$500,000 by year 5 to earn 70%. Once Mawson earns 70% a joint venture between the parties will be formed. Nagambie may then contribute its 30% share of further exploration expenditures or, if it chooses to not contribute, dilute its interest. Should Nagambie’s interest be reduced to less than 5.0%, it will be deemed to have forfeited its interest in the joint venture to Mawson in exchange for a 1.5% net smelter return royalty (“NSR”) on gold revenue. Should Nagambie be granted the NSR, Mawson will have the right to acquire the NSR for A$4,000,000. Mawson is also a major shareholder of Nagambie and owns 10% of the company.

Michael Hudson, Chairman and CEO for the Company, is a qualified person as defined by National Instrument 43-101 – Standards of Disclosure for Mineral Projects and has prepared or reviewed the preparation of the scientific and technical information in this press release.

None of the drill data have been independently verified at this time. These historical data have not been verified by Mawson and are quoted for information purposes only. Assay techniques for gold and antimony are unknown at this stage.

Mawson Resources Limited is an exploration and development company. Mawson has distinguished itself as a leading exploration company with a focus on the flagship Rajapalot gold-cobalt project in Finland and its Victorian gold properties in Australia.

On behalf of the Board,