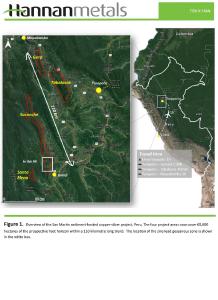 1. Mapping and sampling have defined gossanous lead-zinc mineralization within a 3 by 1 kilometre area. Individual gossanous zones up to 54 metres wide have been mapped in sandstones of the Cretaceous Cushabatay Formation (Figure 1). The zone remains open in multiple directions (Figure 2).

3. Forty individual chip, channel and grab samples are reported and range from 4.7% zinc and 1.3% lead (over 0.6m metres width) to 354 ppm zinc and 353 ppm lead, and average 0.7% zinc and 0.3% lead (Figure 3).
4. The sandstone-hosted system shows a local zonation between zinc, lead, iron and managanese and is interpreted, and in part observed, to grade into a copper-silver rich system (Figure 4):
5. Multiple mineralized stratigraphic positions and styles are now been defined across the property and are described in Figure 4. The zinc-lead gossans overlie the stratabound copper silver mineralization hosted by reduced siltstone of the Sarayaquillo Formation.

Hannan’s mapping from the first stage of this field season has revealed a transgressive structurally controlled copper-silver mineralization hosted by multiple lithologies in host rocks of Jurassic and Cretaceous age. A revised stratigraphy of this period is presented in Figure 4 together with a description of the different mineralized host rocks with typical grades.  The zinc-lead gossans are interpreted to overlie the stratabound copper silver mineralization hosted by reduced siltstone of the Sarayaquillo Formation. Channel samples are considered representative of the in-situ mineralization samples and sample widths quoted approximate the true width of mineralization, while grab (boulder) samples are selective by nature and are unlikely to represent average grades on the property.

The mineralized stratigraphy outcrop in creeks and ridges. To the north and east it disappears under quaternary alluvial cover. The downdip position to the east remains open. The mineralization is localized to an anticline which is cut by trending NNE extensional shear zones. The shears are interpreted to be subordinate to the regional north trending inverted Sapo-Sacanche basement fault (Figure 2).  Distal to the anticline (up to 5 kilometres away) extensive zones of gossanous sandstone after pyrite (without elevated zinc and lead mineralization) have been mapped. In some area’s boulders and outcrops with Rote Fäule redox style-alteration (spotted hematite) have also been observed (Figure 4e).

The sandstone-hosted system shows a local zonation between zinc, lead, iron and managanese.  Importantly it is interpreted, and in part observed, to grade into a copper-silver rich system. Copper-silver mineralized quartz sandstones from the Cushabatay Formation have been previous reported, 2 kilometres south (one boulder: 3.8% copper, 10 g/t silver) and 15 kilometres north (two boulders: 2.6% copper, 36g/t silver and 2.8% copper, 50 g/t silver) from the same stratigraphic position of the new zone described here, supporting the copper/silver potential of this sandstone horizon. The target is partly concealed by thin quaternary cover and the major redox boundary is not exposed at current erosional level, which suggests that the copper dominated part of the system may also exist at depth.

Zonation of anomalous lead and zinc is well documented in all major producing sediment-hosted stratabound copper basins globally. For example in the Kupferschiefer of Poland it is considered as distal parts of the reduced facies sediment hosted model. In the Spar Lake district, US, the mineralization grades from distal pyrite (Fe) zone to galena (lead), sphalerite (zinc) to the a copper rich zone. The Central African Copperbelt also contains significant deposits of zinc.

The San Martin project is an early stage exploration project. Previous mineral exploration in the area is limited.  RTZ worked in the southern and northern areas for one year in the late 1990’s and conducted reconnaissance sampling and drilled 3 diamond drillholes in the transitional lead-zinc parts of the system in the south (Figure 3). A private Canadian company completed soil sampling and some geophysics during a one year period in the southern project area. These data are not available to Hannan.  Hannan’s in-depth regional geological understanding has been derived from the substantial data gathered during petroleum exploration activities undertaken in the Huallaga Basin since 1989. This data, which recently has been made publicly available, includes >2,000 kilometres of 2D seismic, 618 kilometres of geological traverses, 1,600 gravity stations, 13,000 kilometres of aeromagnetic surveys and >2,000 rock samples for geochemical and petrological studies.  This information has provided Hannan a tremendous amount of data to guide exploration and support geological models.

At San Martin, we believe we have identified an opportunity which could result in a significant discovery. As a project generator we continue to review new opportunities, but at same time we need to consider all options to advance a district scale opportunity at San Martin. The results from our initial work to date has attracted the interest of a number of major mining companies. While we are in the early stages of our work programs, it would remiss to not consider partnership opportunities that we believe are in the best interest of the Company. To date the Company has had numerous discussions and exchanges of information and at this time is awaiting follow up documentation from select parties.

Sedimentary-hosted stratiform copper-silver deposits are among the two most important copper sources in the world, the other being copper porphyries.  They are also a major producer of silver.  According to the World Silver Survey 2020 KGHM Polska Miedz’s (“KGHM”) three copper-silver sediment-hosted mines in Poland are the leading silver producer in the world with 40.2Moz produced in 2019. This is almost twice the production of the second largest producing mine. The Polish mines are also the sixth largest global copper miner and in 2018, KGHM produced 30.3 Mt of ore at a grade of 1.49% Cu and 48.6 g/t Ag from a mineralized zone that averages 0.4 to 5.5 metres thickness.

Hannan Metals Limited is a natural resources and exploration company developing sustainable and ethical resources of metal needed to meet the transition to a low carbon economy. Over the last decade, the team behind Hannan has forged a long and successful record of discovering, financing and advancing mineral projects in Europe and Peru.

Mr. Michael Hudson FAusIMM, Hannan’s Chairman and CEO, a Qualified Person as defined in National Instrument 43-101, has reviewed and approved the technical disclosure contained in this news release.