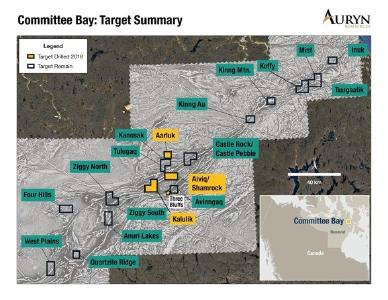 (PresseBox) ( Vancouver, British Columbia, 18-11-14 )
Auryn Resources Inc. (TSX: AUG, NYSE AMERICAN: AUG, “Auryn” or the “Company” - http://www.commodity-tv.net/c/search_adv/?v=298204) is pleased to announce that the company drilled a 1.5 kilometer gold-bearing hydrothermal system at the Aiviq target. A total of 16 diamond drill holes (4,996 meters) consistently intersected the target structure (Figure 2), with the best intercept being 13.5 meters of 1.54 g/t gold (including 6 meters of 3.3 g/t gold) in hole 12 at the southwest margin of the drilling program, leaving the system open in that direction (Figures 3 – 4).  Hole 12 also exhibited the most intense alteration and quartz veining along the system.

“Our ability to target hydrothermal systems under the 95% covered 300km Committee Bay gold belt has improved considerably. The southern-most drilled hole at Aiviq represents a significant opportunity to make a major discovery.

Auryn also drilled 22 Rotary Air Blast (RAB) holes (4,135 meters) at the Kalulik and Aarluk prospects (Figures 1– 2), which identified two additional gold-bearing hydrothermal systems that have geological characteristics consistent with the Three Bluffs deposit. This demonstrates Auryn’s improved ability to target under till cover. The Kalulik and newly identified Shamrock prospects are south of Aiviq on the same shear zone.

The majority of the drill holes intersected 20 – 40 meter widths of intense quartz veining and sulphidized banded iron formations (Figures 5 – 9), which Auryn believes demonstrates the potential for a significant discovery along this regional fault zone.  Table 1 lists the complete results from the Aiviq core drill program.

Due to the strength of the hydrothermal system observed along this regional fault zone, Auryn has further evaluated the high-resolution tills collected in 2017 and 2018 and has identified two high-priority drill targets along the Aiviq regional fault zone.  One of these targets is located four kilometers south of the 2018 drill program and has become known as the Shamrock prospect (Figure 2). The other is located 500 meters southeast of this year’s drill program (Figure 2) and is called Aiviq South.

In addition to drilling, Auryn sampled a number of high-grade boulders down ice of the Aiviq prospect, further demonstrating the potential of this regional fault zone (Figure 3).  Highlights from the 2018 sampling include 26.3, 13.2 and 12 g/t gold. Table 2 includes a summary of these results.  Auryn’s technical team is currently evaluating the Aiviq South prospect as a potential source area of the high-grade boulder located down ice of the Aiviq prospect.  The Shamrock prospect is supported by high-grade boulders sampled historically with highlights including 12.89 and 7.61 g/t gold.

“We feel that we are in a productive gold system at Aiviq due to the strong alteration and fluid flow observed along this regional fault zone.  The strengthening of the widths and mineralization at the southwest limit, and the new high-resolution till anomaly at Shamrock, lead us to believe we should continue exploring along this regional fault zone.

“In addition, the identification of three separate gold-bearing hydrothermal systems under cover at the Kalulik and Aiviq prospects indicate to us that our targeting process is leading us in the right direction. We drilled rocks that we believe have the necessary geologic characteristics to host a significant gold deposit.  The targets drilled this year represent a fraction of the opportunities still available at Committee Bay based on high-resolution till targets and historical drill intercepts that are still open for expansion.”

Auryn Resources is a technically driven junior mining exploration company focused on delivering shareholder value through project acquisition and development. The Company’s management team is highly experienced with an impressive track record of success and has assembled an extensive technical team as well as a premier gold exploration portfolio. Auryn is focused on scalable high-grade gold deposits in established mining jurisdictions, which include the Committee Bay and Gibson MacQuoid gold projects located in Nunavut, the Homestake Ridge gold project in British Columbia and a portfolio of gold projects in southern Peru, through Corisur Peru SAC.

This release includes certain statements that may be deemed “forward-looking statements”. Forward-looking information is information that includes implied future performance and/or forecast information including information relating to or associated with the acquisition and title to mineral concessions. These statements involve known and unknown risks, uncertainties and other factors which may cause actual results, performance or achievements of the Company to be materially different (either positively or negatively) from any future results, performance or achievements expressed or implied by such forward-looking statements. Readers should refer to the risks discussed in the Company’s Annual Information Form and MD&A for the year ended December 31, 2017 and subsequent continuous disclosure filings with the Canadian Securities Administrators available at www.sedar.com and the Company’s registration statement on Form 40-F filed with the United States Securities and Exchange Commission and available at www.sec.gov.

The Toronto Stock Exchange has not reviewed and does not accept responsibility for the adequacy or accuracy of this release.

Intercepts were calculated using a minimum of a 0.25 g/t Au cut off at beginning and end of the intercept and allowing for no more than six consecutive meters of less than 0.25 g/t Au.

Analytical samples were taken by sawing NQ diameter core into equal halves on site and sent one of the halves to ALS Lab in Yellowknife, NWT for preparation and then to ALS Lab in Vancouver, BC for analysis. All samples are assayed using 50g nominal weight fire assay with atomic absorption finish (Au-AA26) and multi-element four acid digest ICP-AES/ICP-MS method (ME-MS61). QA/QC programs using internal standard samples, field and lab duplicates and blanks indicate good accuracy. Due to the nuggety nature of mineralization encountered, the Company will be running additional analysis on duplicate samples to better understand the analytical precision.

Intercepts were calculated using a minimum of a 0.25 g/t Au cut off at beginning and end of the intercept and allowing for no more than four consecutive samples (six meters) of less than 0.25 g/t Au.

True widths of mineralization are unknown based on current geometric understanding of the mineralized intervals.

Approximately 1-2kg of material was collected for analysis and sent to ALS Lab in Vancouver, BC for preparation and analysis. All samples are assayed using 50g nominal weight fire assay with atomic absorption finish (Au-AA26) and multi-element four acid digest ICP-AES/ICP-MS method (ME-MS61). QA/QC programs for 2018 rock grab samples using internal standard samples, lab duplicates, standards and blanks indicate good accuracy and precision in a large majority of standards assayed. Grab samples are selective in nature and cannot be consider as representative of the underlying mineralization.