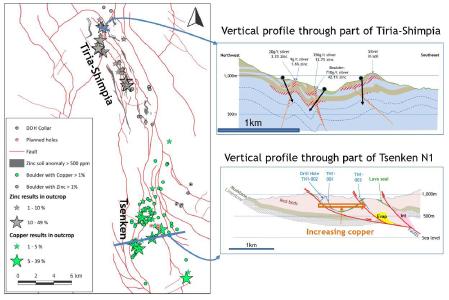 (PresseBox) ( Toronto, Ontario, 21-06-15 )
Aurania Resources Ltd. (TSXV: ARU) (OTCQB: AUIAF) (Frankfurt: 20Q) (“Aurania” or the “Company” - https://www.commodity-tv.com/ondemand/companies/profil/aurania-resources-ltd/) reports that drilling has intersected sediment-hosted copper mineralization at Tsenken N1 in the Company’s Lost Cities – Cutucu Project (“Project”) in southeastern Ecuador.  As a result, drilling will continue at the Tsenken N1 target and the second rig is being moved to the Tiria-Shimpia target area.

Aurania’s Chairman & CEO, Dr. Keith Barron commented, “We believe that Tiria-Shimpia forms part of the same mineralized system as the sediment-hosted copper at Tsenken, and if we are correct, we have an enormous mineralized system on our hands – one that extends over some 45 kilometres.  The remarkable opportunity to explore this entire system is afforded to us because we have a large concession block.  With one drill rig continuing the drilling at Tsenken N1 and the second moving from Kuri-Yawi to Tiria-Shimpia, we will be drilling at both ends of this extensive mineralized system.  We have the option of returning to Kuri-Yawi when we have incorporated all the new data to advance our knowledge of the epithermal target there.”

The three drill holes completed at Tsenken N1 show that sediment-hosted copper increases in intensity towards the east as illustrated in Figure 1.  The number of mineralized layers also increases to the east with three layers having been intersected in the easternmost hole.  A total of 1,564 metres (“m”) have been drilled at Tsenken N1 to date.  Assay results from the easternmost hole, TSN1-003, are awaited.

Rather than drilling the next hole further east, hole 4 is being drilled approximately 700 metres (“m”) northwest of hole 3.  This decision is based on the concept, described below, that copper at Tsenken is linked with zinc at Tiria-Shimpia.  Hole 4 is inclined beneath an outcrop of high-grade copper-silver that returned 263 grams per tonne silver and 39% copper, the position of which suggests that it is the extension of the mineralized sedimentary layers intersected in hole 3.  Hole 4 is planned to a depth of 200m.

Sediment-hosted copper-silver in the Tsenken N1 area lies within the same fault system as the sediment-hosted zinc-silver mineralization at Tiria-Shimpia as shown in Figures 1 and 2.  The exploration concept is that the copper at Tsenken is part of the same mineralized system seen at Tiria-Shimpia – the system gradually changes from copper-dominant to zinc-dominant, as it does in parts of the Kupferschiefer (Figure 2).  The completed drill holes at Tsenken N1 lie on the margin of the copper zone as illustrated in Figure 2 and hole 4 should be within the copper zone.  The drilling that that is planned to start before end of June at Tiria-Shimpia is designed to intersect the zinc and silver-mineralized layers seen in outcrop and will also provide information which will help to refine this exploration concept and lead to the definition of additional precise drill targets.

The recent phase of drilling at Kuri-Yawi totalled 1,948m in two holes (YW-008 and YW-009).  Epithermal textures and pyrobitumen were identified in banded carbonate-silica veinlets over a vertical interval of approximately 600m in both holes, suggesting close proximity to the core of an epithermal system.  In addition, the mineral alteration intersected in hole 9 shows that it is closer to the core of the system than hole 8.  These data will be used to constrain the interpretation of MobileMT and magnetic data to refine the location of the epithermal target which lies to the east of Hole 9.  Hole 8, which was drilled to a depth of 1,212m, did not intersect the porphyry target interpreted from the MobileMT data.  The rig is being moved from Kuri-Yawi to Tiria-Shimpia while the drill data is used to constrain the geophysical model to refine both the epithermal and porphyry targets for possible further drilling at Kuri-Yawi.

Figure 1.  Left: Plan view of the fault system (faults are shown as red lines) that hosts the Tsenken sediment-hosted copper-silver in the south and the sediment-hosted zinc-silver at Tiria-Shimpia.  Top right: vertical profile through the Tiria-Shimpia target (limestone in blue and sandstone – siltstone in brown, mineralized zones are red-hatchured). Lower right: vertical profile through the Tsenken N1 area showing the location of drill holes 1, 2 and 3 testing red-beds beneath the lava seal for sediment-hosted copper. (Evap. is evaporite (salt) and Int. is intrusive such as a porphyry).

Figure 2.  Left: Plan view of the fault system (faults are shown as red lines) that hosts the Tsenken and Tiria-Shimpia sediment-hosted mineralized systems with bore hole collars shown.  Right: Metal zoning typical of the Kupferschiefer modified with Aurania’s exploration concept of Tiria-Shimpia being in the zinc-dominant and Tsenken being in the copper-dominant part of the system.

Laboratories: The samples were prepared for analysis at MS Analytical (“MSA”) in Cuenca, Ecuador, and the analyses were done in Vancouver, Canada.

Sample preparation: Soil samples consisted of approximately one kilogram of clay from the iron-rich “B” horizon at each sample point. The soil samples were dried and subsequently screened through 80 mesh (using screens with apertures of approximately 0.18 millimetres).  A 250 gram (“g”) split of the material that passed through 80 mesh was pulverized to 85% passing 0.075mm and was packaged for shipment to the analytical facility.

The rock samples were jaw-crushed to 10 mesh (crushed material passes through a mesh with apertures of 2 millimetres (“mm”)), from which a one-kilogram sub-sample was taken.  The sub-sample was crushed to a grain size of 0.075mm and a 200 gram (“g”) split was set aside for analysis.

Analytical procedure:  A 0.5g split of the -0.075mm fraction of soil samples underwent digestion with aqua regia, and the liquid was analyzed for 48 elements by ICP-MS. Apart from being analyzed by ICP-MS, gold was also analyzed by fire assay with an ICP-AES finish.

Approximately 0.25g of rock pulp underwent four-acid digestion and analysis for 48 elements by ICP-MS.  For the over-limit samples, those that had a grade of greater than 1% copper, zinc and lead, and 100g/t silver, 0.4 grams of pulp underwent digestion in four acids and the resulting liquid was diluted and analyzed by ICP-MS.

QAQC: Aurania personnel inserted a certified standard pulp sample, alternating with a field blank, at approximate 20 sample intervals in all sample batches. Aurania’s analysis of results from its independent QAQC samples showed the batches reported on above, lie within acceptable limits.  In addition, the labs reported that the analyses had passed their internal QAQC tests.

The geological information contained in this news release has been verified and approved by Jean-Paul Pallier, MSc.  Mr. Pallier is a designated EurGeol by the European Federation of Geologists and a Qualified Person as defined by National Instrument 43-101, Standards of Disclosure for Mineral Projects of the Canadian Securities Administrators.

Aurania is a mineral exploration company engaged in the identification, evaluation, acquisition and exploration of mineral property interests, with a focus on precious metals and copper in South America.  Its flagship asset, The Lost Cities – Cutucu Project, is located in the Jurassic Metallogenic Belt in the eastern foothills of the Andes mountain range of southeastern Ecuador.

This news release may contain forward-looking information that involves substantial known and unknown risks and uncertainties, most of which are beyond the control of Aurania. Forward-looking statements include estimates and statements that describe Aurania’s future plans, objectives or goals, including words to the effect that Aurania or its management expects a stated condition or result to occur. Forward-looking statements may be identified by such terms as “believes”, “anticipates”, “expects”, “estimates”, “may”, “could”, “would”, “will”, or “plan”. Since forward-looking statements are based on assumptions and address future events and conditions, by their very nature they involve inherent risks and uncertainties. Although these statements are based on information currently available to Aurania, Aurania provides no assurance that actual results will meet management’s expectations. Risks, uncertainties and other factors involved with forward-looking information could cause actual events, results, performance, prospects and opportunities to differ materially from those expressed or implied by such forward-looking information. Forward looking information in this news release includes, but is not limited to Aurania’s objectives, goals or future plans, statements, exploration results, potential mineralization, the corporation’s portfolio, treasury, management team and enhanced capital markets profile, the estimation of mineral resources, exploration, timing of the commencement of operations and estimates of market conditions. Factors that could cause actual results to differ materially from such forward-looking information include, but are not limited to, failure to identify mineral resources, failure to convert estimated mineral resources to reserves, the inability to complete a feasibility study which recommends a production decision, the preliminary nature of metallurgical test results, delays in obtaining or failures to obtain required governmental, regulatory, environmental or other project approvals, political risks, inability to fulfill the duty to accommodate indigenous peoples, uncertainties relating to the availability and costs of financing needed in the future, changes in equity markets, inflation, changes in exchange rates, fluctuations in commodity prices, delays in the development of projects, capital and operating costs varying significantly from estimates and the other risks involved in the mineral exploration and development industry, the effects of COVID-19 on the business of the Company including but not limited to the effects of COVID-19 on the price of commodities, capital market conditions, restrictions on labour and international travel and supply chains, and those risks set out in Aurania’s public documents filed on SEDAR. Although Aurania believes that the assumptions and factors used in preparing the forward-looking information in this news release are reasonable, undue reliance should not be placed on such information, which only applies as of the date of this news release, and no assurance can be given that such events will occur in the disclosed time frames or at all. Aurania disclaims any intention or obligation to update or revise any forward-looking information, whether as a result of new information, future events or otherwise, other than as required by law.