Work to do for Suzuki MXGP in Mexican Altitude 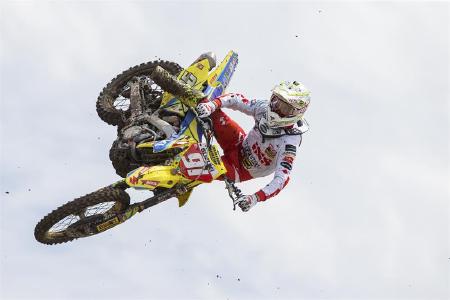 
At 1800m high, the MXGP round in Leon in Mexico gave a completely new problem for the Suzuki World team of Kevin Strijbos, Arminas Jasikonis, Jeremy Seewer and Hunter Lawrence as the high altitude causes a considerable loss of power for all bikes.

However, while they are all down on horsepower compared to sea-level, that didn’t stop the two RM-Z450WS and the two RM-Z250 race bikes getting out the gate well in their two respective qualifying races, with all four riders mixing-it-up in the top-10 around the first corner.

Unfortunately, that’s when things started to go a little wrong, as small mistakes early-on in the races dropped each of the riders down the field, but as they have shown all season, none of them gave up and they all tried to improve their position as best they could before the chequered flag.

Strijbos had this to say about his performance: “My start was pretty good, which is a nice improvement, but I messed-it-up in the next few corners, going from fourth-or-fifth to 10th or something. It’s a pity as the speed was there, I felt good, it’s just a weak point for me it seems, these first few corners. I just have to work on that.

“Hopefully we can take another good start in the races tomorrow and then try to put my head down again these first laps and do a better job. I know it’s important as it happened in Argentina so I know it’s something I need to improve; I just need to go out and do it. Still, I came back to seventh so I’m pleased with that as I get a good gate-pick for tomorrow. The team has worked hard to get the RM-Z450WS working well in this altitude so a big thanks to them, but I want to repay them with my results on the track now.”

Team mate Jasikonis also just needs to cut-out those small mistakes if he wants to start challenging the top-five, which his speed shows he is fully capable of doing: “I had a good jump off the start and I was running quite fine, but I made a little mistake. It was a stupid crash, in a corner by myself. I got up and passed some guys back and I really was feeling good; I just need to fix my crashes and I can battle more at the front. The rhythm was good all race, it’s just this track is quite difficult as they watered a lot in places and then no water in other places so that can be sketchy, but I am pleased with how I was riding generally.”

In the MX2 class, it was the first chance to see Seewer running the red plate (as championship leader) and despite also dropping down the field on the first lap, he was pleased to have got a good start and to have come through the field as well as he did: “I had a really great start, I was like third I think then in the second corner Pauls Jonass almost crashed in front of me so I lost a couple of spots avoiding that, then the next corner I hit neutral and tried to accelerate but I wasn’t in gear so I just fell over. I was fighting back really quickly, then I got stuck with Samuele Bernardini and made some mistakes due to the track, and how much water they put on it in places. In the end, I found my rhythm and I caught-up as much as I could, ending up in eighth position. It’s not the most important gate-pick as its quite open, so eighth should be OK and after getting a good start today, I’m confident for tomorrow that I can do the same. The speed is good; I just have to eliminate the mistakes and everything should be fine for the races.”

The final member of the team, Lawrence, who came into this round feeling ill as a result of all the travelling that has been done in the last four gruelling weeks, his status wasn’t helped by a crash that saw him get tangled-up with another rider and put himself dead last. Despite all this, he still completed the entire race and hopes that tomorrow will go a lot better. “I had a bad qualifying position but then had a good start and was around top-10. Then the second lap, I was coming around a corner and slid-out into another rider and gave my head a bit of a bang and knocked the wind out of me. I got back up and tried to ride and get some laps-in on this track. I’m in this for the long run and I’ll keep going no matter what, so I wasn’t going to pull in. It wasn’t a great day today but I’ll try my best tomorrow, regroup, come back fighting and hope for the best,” said the young Australian.

The fifth member of the Suzuki World team, Bas Vaessen, is missing Mexico due to a broken collarbone sustained at the last round in Argentina.

So overall, not the best day for the team but it was only qualification and all four riders believe that the results can be a lot better when the real action begins.