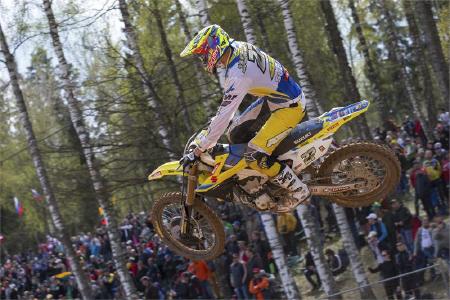 A weekend away from the MXGPs has given the Suzuki World MXGP team a chance to recharge their batteries, but now Arminas Jasikonis, Jeremy Seewer, Hunter Lawrence and Bas Vaessen make their way to Teutschenthal in Germany for the eighth round of the 2017 Motocross World Championships, in what should be a good test for all the riders and their Suzuki machinery.

For Jasikonis, it will be a chance to continue his good run of form that has seen him finish fifth, seventh and third in three of the last four motos. The Lithuanian rider has actually enjoyed some time away from the race track, but will be coming in fresh for the next challenge in his breakout MXGP season. “I haven’t actually done too much since Latvia, just enjoying being at home with the nice weather and having some fun. I took the weekend off but I’m already missing racing. I’ve still been doing some training on the RM-Z450WS and some off-bike work but it’s not the same as race day obviously. The last race was amazing; really, really good so I want to keep doing that, keep improving and I hope that Germany will be another big step for me.”

Things didn’t go quite so well in Latvia for MX2 championship contender Jeremy Seewer, so the off-weekend gave the Swiss rider a chance to find the enjoyment factor again which sees him coming into Teutschenthal refreshed and ready to win races on board his RM-Z250 once again. “I did the ADAC race in Germany last weekend because I wanted to race some different races and have some fun without the pressure of championship points. I still enjoy the MXGPs of course but it’s just different to come to a race without results being so critical. I got to see some old friends there and it was just a good opportunity to put my mind on something else. I chose to ride the RM-Z450WS machine because Kevin Strijbos is injured and his bike is free and I’ll be moving up next year so it all just seemed to make sense. I went 1-1 which is great, I had a lot of fun, gave some input to the team and put some good time on a bike that I’ll be riding in 2018. I love riding the 450 and it was cool to represent the machine to all the Suzuki Germany guys who obviously support everything we do so much.”

Team mate Lawrence also made the trip to Mölln for the ADAC, where he finished behind Seewer with 2-2 moto finishes, albeit on his usual RM-Z250. “The ADAC championship is good training and good preparation for the MXGPs with similar format. I just wanted to keep working on all the little things that go into a race weekend so that everything runs smoothly for the big races. I would have liked to have beaten Jeremy, even if he was on the RM-Z450WS, but I couldn’t get near him off the start. It was still a fun weekend though and we enjoyed ourselves, which we always do when we’re hanging out with each other and it’s nice to have that team spirit in the Suzuki World camp. I went 1-1 at Teutschenthal last year in the EMX250 class so I have a good feeling at the track, and I’m hoping I can bring that into this year’s races and have a good time there.”

Dutch rider Vaessen decided to race a little bit close to home at the Dutch championship round at Emmen where he finished fourth in race one before a first turn pile-up ended race two prematurely. He also had some bad luck in the week which messed-up his scheduled training sessions. “My plan was to put in some good days at the practice tracks but unfortunately a stone hit me right on my nose which caused a pretty large amount of bleeding and swelling. Thankfully I was still able to race at the weekend but I definitely hoped to put in more bike time during the week. The race went ok though, I got a really good start in the first race and was battling up front with Olsen and Bogers really well, so that was good. Then in the second race, my bike got bashed up too badly in the first turn crash so I had to pull off. It was a good warm-up for Teutschenthal, where I want to do my best and build upon what I managed in Latvia at the last round.”

Unfortunately Strijbos is still out injured from his elbow surgery after the MXGP of Trentino, but the recovery seems to be going well and the Belgian is in good spirits. “Every day the injury is getting better and better, I can do quite a lot with my arm which is good. Cycling is no problem anymore so I can do that to try to keep my fitness up. I want to keep myself in shape for when I get back on my RM-Z450WS, and after my next hospital appointment I should have a better idea of when that will be.”

So the four members of the Suzuki World team head to Germany, refreshed after this past weekend but keen to get back to MXGP action and the challenges that await them there.