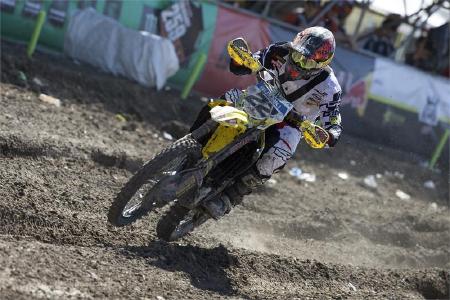 (PresseBox) ( Bensheim, 17-04-13 )
With the four opening flyaway races of the 2017 MXGP World Championship completed, the Suzuki World MXGP team had a well-deserved weekend off before this weekend's MXGP of Trentino, held at the beautiful Pietramurata track in the alpine region of Italy.

After the trials, tribulations and travel of the opening rounds, the team of Kevin Strijbos, Arminas Jasikonis, Jeremy Seewer and Hunter Lawrence all decided that they'd use this week break after the Mexico round to recharge their batteries and prepare themselves for this first European MXGP of the year.

For Seewer, the MX2 red-plate holder, everything is going great: "After Mexico, I didn't actually feel too bad with the jet-lag and everything so I could train off the bike pretty well. And then again this weekend I also took off the bike so I could get some rest and be prepared for the next few tough weeks. I just did some physical training before we get back on the bike today and tomorrow, it's all part of the big plan.

"I actually really like the Trentino track, I have good memories there. I did some of my first GPs there where I did well. The track somehow suits me so I'm really looking forward to it and I'm really excited to be back in Europe with a nice crowd, where everyone knows you; it will be really cool I think, especially as I'll be riding on my Suzuki RM-Z250 with the red plate."

For his MX2 team-mate Lawrence, this break was used as a chance to recuperate from the minor injuries sustained in Mexico, get back to feeling 100% and just make sure the European rounds go to plan. As a racer, he obviously still wanted to line-up at the German ADAC race last Sunday, but it is a long rookie season and it was decided it would be better to concentrate on the MXGPs right now. "I came home from Mexico and recovered a bit, made a plan with the team how to tackle this next part of the season, with training and everything like that. Hopefully the weather stays good as I'm looking forward to this first round in Europe. I rode there last year in the EMX250 class and enjoy the track, so I really want to turn things around. Should be good."

Unfortunately/ the third member of the MX2 squad Bas Vaessen is still recovering from his broken collarbone, sustained at the MXGP of Argentina.

In the MXGP class, the message is much the same as the MX2 guys. With 19 rounds, and after such a gruelling opening month, it was better to take the chance to recover and just relax a bit before this next set of races. Trentino is this weekend and then next weekend there is the MXGP of Europe, held at Valkenswaard, Netherlands, so the riders really want to be on top of their game.

"I haven't done too much since Mexico" said Strijbos, "I was quite tired with the jet lag so I just decided to get some rest, do a bit of easy cycling. Then Thursday and Friday we did some testing on the bikes and then Saturday and Sunday I had off. Monday I did a long cycle, around four hours and then the last couple of days I've got back on the bike for some good riding sessions. On Thursday evening, we leave for Italy as I'll be driving down with my girlfriend and my child; it should be a good trip and it's nice to get back to the European rounds. I actually like the Trentino track, it's a little bit old-school track so I'm going to try again to get some decent results."

Jasikonis hasn't actually ridden the track since he was on 85cc bikes, but is looking forward to racing the RM-Z450WS at this hilly location: "I'm really excited for the European GPs, it feels more like home and I'm just going to try and do my best and enjoy my ride. After Mexico we did a little bit of testing on the engines as now we are going to be at normal altitude again after being so high up last round. It went good though and just having a free weekend was nice, not having to race. It is a long season and I really want to prepare myself properly for all 19 rounds."

Joining the team this round will be young French rider Zachary Pichon, who is making his debut in the EMX250 class in what will a fiercely contested championship, but one that is a good stepping stone for riders looking to eventually find themselves in the MXGPs. Pichon is looking forward to the challenge though and hopes to put in two solid results at this first round of the series.

Other than Vaessen's absence, all other members of the team are fit and healthy and excited to get back to MXGP action on more familiar territory. There is also the bonus that it is another chance for Seewer and the team to ride with the red plate in front of what should be a large and passionate crowd for this fifth MXGP of the year.