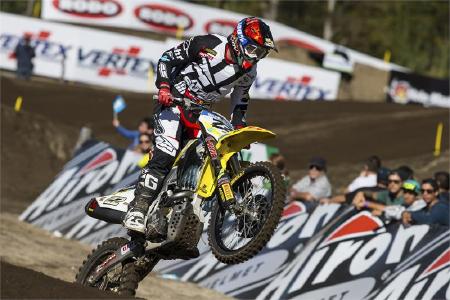 (PresseBox) ( Bensheim, 17-03-29 )
After Qatar, Indonesia and Argentina comes the fourth round of the 2017 MXGP World Championship, held in Leon, Mexico this weekend. The first three rounds have all provided different challenges to the Suzuki World team and the high altitude of Mexico should also test out the capabilities of the bikes, including the new RM-Z450WS which will be the first time running with such little oxygen in the air.

However despite this new test, Kevin Strijbos, Arminas Jasikonis, Hunter Lawrence and Jeremy Seewer will all head to the Central American country excited by the prospect of showcasing their skills on the world stage once again. For Seewer, this race is especially important as it will be his first ever time running a red plate, and it’s not just him who is excited to run it, as General Manager Stefan Everts explains: “It’s nice to come home with the red plate from Argentina as for Jeremy and a lot of the guys in the team it’ll be their first red plate so it’s cool for them. It will be nice to see it on the bike and to see him race with it in Mexico. It’s also the first time I’ve seen it since I’ve been with Suzuki so that’s cool as well and I hope that we can keep that as long as possible. It won’t be easy but we try for the best.”

The number 91 echoed his sentiments: “It’s a great feeling to have the red plate. I don’t think I realised it at the time and at the moment it’s just a red plastic plaque that they handed to me, but I’m looking forward to when I get to see it on my bike in Mexico. That’s what we do all this hard work for.” He also went on to explain what they’ve done since returning from Argentina: “I did a Dutch championship race on Sunday, just tried to work on myself, get the suspension a little bit better, get the starts a bit better. We are going to do a lot of starts this week, and also try to change the bike on quite a few points as we are going to be on high altitude for this next race, which changes things quite a bit.”

Everts then explained a little bit more about how the team manages all these races, making sure everyone stays fresh for the gruelling season ahead: “The riders had a few days off to get over the jet-lag and then they started riding on Thursday/ Friday and then we had the Dutch Championships in Oss, but most of the team including the race mechanics had the weekend off to recover from the travel. The practice mechanics took over the duties for that race. It’s a really good track there and it’s better to do a race than just practice, the effort is always harder and there were a lot of good riders, so it was a good choice to go there. Jeremy almost won the overall, he won the second race, but I also got to watch our EMX250 contestant Zachary Pichon race for the second time. It was good to see him in action and he showed some good riding skills. AJ and Kevin both struggled a bit but at the end of the day, it was good training and that was main reason for going. Hunter Lawrence didn’t race as he is on a little break, but he’ll definitely be coming back fit, fresh and motivated to put his Argentina struggles behind him.”

While obviously it is nice to get good results at these National Championship races, the main objective is always the MXGPs and that’s where AJ and Strijbos are concentrating their efforts: “I’m really excited for Mexico” said Jasikonis, “I really want to do well there because I’m upset with myself that I haven’t had a good race since the pre-season and I feel like I should be doing better. I haven’t heard too much about the track, other than it’s got a high altitude and all the bikes will be slower than usual because of that.”

Kevin has ridden there before, and actually has good memories from 2014 when he came fourth, just two points off taking the overall. “I’m looking forward to the race in Mexico, today I’m training at Lelystad which is hard-pack similar to there, but Mexico is a good track, it’s a completely different track because of the altitude so all of the bikes are going to be slow. I feel good, my body is good, I just want to get some good starts and then I know I can stay up front because if you don’t get good starts it is extremely difficult to come through the field. Hopefully we have some improvements for the weekend though.”

Unfortunately one member of the team who won’t be there is Bas Vaessen who is still recovering from his broken collarbone that he sustained in Argentina. He had surgery when he got back and it went well, however he now has four weeks of recommended recovery time before he is fit and healthy, with the team expecting his GP return to be in Latvia.

Despite dropping down to four riders, the Suzuki World squad heads to this Mexican round in good spirits and buoyed by the fact that Jeremy Seewer’s RM-Z250 will be adorned by the red plate. In what is the last flyaway for a while, each member is still looking for improvements in their performances and believe that Mexico will be the place they can find them.