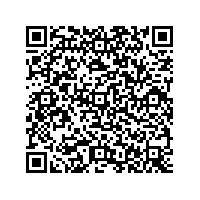 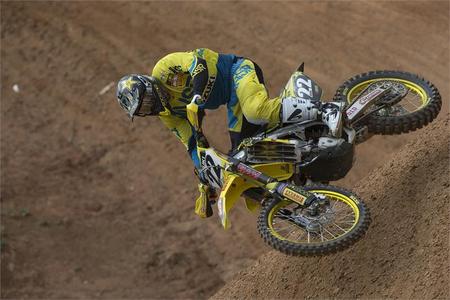 (PresseBox) ( Bensheim, 15-06-19 )
Just a few days after the Grand Prix of Italy and round nine of the 2015 FIM Motocross World Championship Rockstar Energy Suzuki World MXGP will be starting the second half of the present MXGP campaign with a trip to the Talkessel circuit in Teutschenthal, Germany this weekend.

Kevin Strijbos carries some strong momentum into the event after his second moto victory at Maggiora and first podium finish of the season on the works RM-Z450.

The Belgian will fly the team's flag alone this weekend with Clement Desalle - the winner of the 2014 event at Talkessel - recuperating from his left knee and right shoulder injuries. Strijbos is rapidly gaining full race fitness and speed after problems with his thumb and wrist and the Maggiora performance and result through the muddy Italian soil was an important step.

"My thumb and wrist are OK, a bit stiff but no problems," he commented this. "The track there in Germany is OK but it is tight and this means it can be hard to make-up time on other riders as we all keep a similar speed. I hope the weather stays good for some nice racing...but then again if it rains then that's also alright!"

Talkessel has long been the home for Grand Prix motocross in Germany and was the well-received site of the 2013 Motocross of Nations. The shallow undulations of the narrow course mix off-cambered turns, a twisty trajectory and some hard-pack terrain. The long-term weather forecast predicts dry but cloudy conditions for the weekend with decent temperatures for early summer.

A hefty crowd is expected to turn out and cheer native Max Nagl as the current leader of the MXGP standings but many of the German fans will also know about the abilities and progression of Rockstar Energy Suzuki Europe's Jeremy Seewer. The MX2 rider was the second Suzuki man on an Italian GP podium last weekend when he grasped third position (and his second rostrum appearance of the year) and has been a regular contender in the ADAC MX Masters German national championship over the years. The Swiss even used his RM-Z250 to defeat a slew of 450cc machines at the last round of the domestic competition at Bielstein a fortnight ago. He will be looking to better this overall classification of eighth from the 2014 German GP, which was his first as a full-time member of the MX2 pack.

"I had crashes in both races and it was difficult to pass...but I actually like the track there!" he opines. "I've been riding at Teutschenthal for a few years actually, since I used to race 85s. It's a cool place. I feel confident at the moment and things are going well. I feel good with the bike and what we have done with the suspension because I was struggling with that in the first few GPs. Everyone has been pushing hard to improve."

Seewer gained 38 points from good starts and a bright weekend of results in Italy and, like Strijbos, should be able to carry some positive vibes into his next Grand Prix appointment. Just how much does a podium finish affect prep for the next round? "It is hard to say because during a week a lot can change," he says. "For me it doesn't matter so much but it is cool that the next GP is so close. I will practice in the week and I think we will have some good fun there."

Team-mate Glenn Coldenhoff had an unlucky weekend in Italy in the MXGP class and his 15th overall was not the next step from a personal best GP result in France two weeks previously that the Dutchman was looking for. There were some promising signs for the '#259' though and his fifth place in Saturday Qualification Heat across the dry Maggiora hard-pack was an indication that the MXGP rookie is picking-up speed rapidly on the RM-Z450 in all types of conditions. "Teutschenthal has never been my favourite track but even on a hard-pack place that I don't like so much I can still have the speed - like we saw on Saturday in Italy. I hope the weather will be good and we don't have another 'lottery'," he said.

One element in which Coldenhoff has seen marked progress is through his prowess from the start line and his potential out of the gate has become more focussed in recent meetings. "I have improved a lot and we found our problem," he states. "We still haven't had the holeshot though so we will keep practicing!"

The Grand Prix of Germany will be the second of back-to-back races in MXGP and the series will go into hiatus next week before moving to northern Europe in the beginning of July with another doubleheader in Sweden and Latvia.