Steady Progress for Suzuki in Argentina 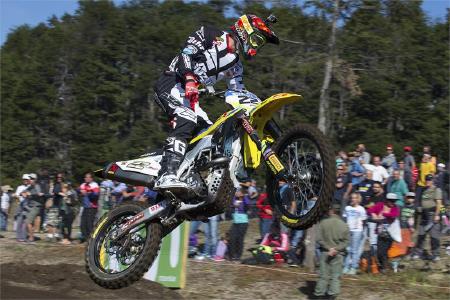 
The mud of Indonesia seemed like a distant memory as the five members of the Suzuki World MXGP and MX2 teams took to the track at the Neuquen circuit in Argentina, nestled in the foothills of the Andes mountain range on Saturday.

After two disappointing timed practice sessions, where none of the riders really showed their true speed, the qualification races went a lot better, albeit with a few mistakes. However, Kevin Strijbos, Arminas Jasikonis, Jeremy Seewer, Hunter Lawrence and Bas Vaessen are confident that for the racing, their results will go even better as they look to make an impact on the podium in both classes.

Said MXGP RM-Z450WS rider Kevin Strijbos: “The qualification race was good, timed practice was bad. We made some changes in between with the tyre and sprocket which was better for the racing but not great for the start. It was way too aggressive so I had to recover through the field but my riding was really good and I was actually surprised how easy it was. I came sixth so it is good for the gate pick and my speed is there but we just need to get the start right and I think a top five or podium should be within reach.”

Fellow MXGP rider Arminas Jasikonis also agreed that a better result is possible tomorrow, provided he can just cut out a few mistakes: “I’m feeling good, although the track is a little strange for me. I was trying to ride quite smoothly but I made some mistakes which shouldn’t happen. I came seventh though, which is a good result after a couple of horrible rounds, and I feel like I have the speed, I have the style, I have everything I need; I just have to put it all together and I think that can happen tomorrow.”

The MX2 class results mirrored that of the MXGP guys with Jeremy Seewer and Hunter Lawrence finishing sixth and seventh as well. Unfortunately, the third member of the RM-Z250 team, Bas Vaessen, suffered a nasty crash when he was coming through the field and although he didn’t finish the race, he believes his injured leg will be fine for tomorrow when the real racing begins.

After his victory in Indonesia, Seewer would have liked to have finished a little higher but after hitting a kicker on a jump take-off mid-race, he was thankful to be finishing the race in one piece and believes that if he can avoid a similar mistake tomorrow, he has the speed to win another overall here in Argentina: “I had a really bad start but we know the problem so it will good for tomorrow, just my mistake today. I was really far back after that, however I got through to third in just a couple of laps, so my speed was good. Then there was this one sketchy kicker on one side of a jump face and my line took me into it, I saw it coming and I did everything I could to avoid crashing but still got kicked off the bike. Luckily, I landed well in some soft dirt, not a hair out of place, but my bike was destroyed, just lucky again the clutch was ok to get the bike going and I finished up in sixth. I’m confident for tomorrow though.”

Just behind Seewer was team mate Lawrence who put in a great last lap pass to once again follow his friend across the finishing line into seventh position. “It was good, I rode smooth and tried to keep it on two wheels and get some rhythm and a good gate pick for tomorrow. I’m happy with how it went, the bike went well, especially as it was quite sketchy out there with some slippery sections and the square edged bumps. It was an easy track to go fast as it is so wide open, which isn’t my strongest type of track, so I’m happy with how I qualified. It’s always good to move forward through the field and not backwards so yes, very happy with how it ended up.”

Despite Vaessen getting a little banged-up, there is still a positive attitude within the team and all members will be looking to cut out those small mistakes as they continue their championship assault in their respective classes.

The forecast suggests it will be another day of beautiful weather and all five riders hope that there will be a strong yellow presence on the podium in the races.