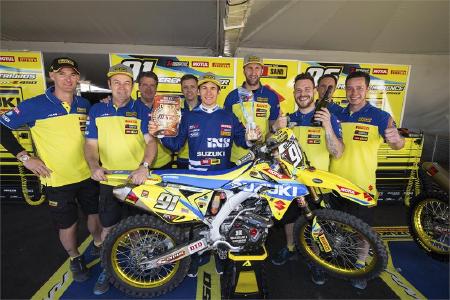 
Jeremy Seewer has taken over the lead of the MX2 World Championship after the third round of the season, held at the beautiful Argentinian track near Villa la Angostura. His results of a fifth and a second were good enough to see him on the third step of the podium, and were also good enough to grab the red plate; the first awarded to the newly-revamped Suzuki World MX2 team.

Other MX2 team members, Hunter Lawrence and Bas Vaessen, unfortunately didn’t have their best weekends with Lawrence struggling to stay consistent on this track, ending up 18th overall despite showing good speed all weekend.

Vaessen suffered a nasty crash early in the first moto which ended his weekend with a broken collarbone. Overall, it was a mixed bag, but the credit definitely deserves to go to Seewer for how he and his RM-Z250 have started this campaign.

General Manager Stefan Everts had this to say about his team’s first red plate holder: “For sure it’s the highlight of weekend for Jeremy to be taking over the red plate. It’s been a couple of years since Suzuki last had one, and for Jeremy, it’s his first; so, it’s nice for him and it’s good for the team to see it on the bike at the next round in Mexico. However, it is a long season so we can’t get ahead of ourselves and hopefully we can keep it longer than that one round. It won’t be easy though, there is a lot of competition out there, the level between him and Pauls Jonass is very close and it’s down to very small details, so we will continue to work hard and keep trying to improve throughout the season. The first race he definitely didn’t ride as well as he could, he left some passes out on the track so there is still room for improvement.”

The new MX2 championship leader agreed: “I think the first moto could have been a lot better,” said Seewer, “but we did some changes for the second race and it worked out. I want to stay on the ground, not get hyped-up too much. We got the red plate and that’s a positive point for sure to be leader after three GP’s, but I think we have to look at weak points and work on them. It is an amazing feeling though to get the red plate for the first time in my life. It’s what I’ve been working for my whole career. First the overall in Indonesia and now the red plate here; just an amazing feeling. It’s strange because I had a bad GP in Qatar, a really good one in Indonesia of course and now again, average in that first moto, so to be points leader is pretty good, I just need to keep working.”

Lawrence also feels he has work to do after a disappointing outing here. Once again speed wasn’t the problem, it was just a few mistakes in each race that left the Australian unhappy with the weekend: He said: “First race wasn’t the best start but I made some passes, then I crashed, made some more passes and then crashed again, ending up 13th. Then pretty much the same story in race two. I think my riding speed was good this weekend, but obviously I have things to work on. I need to go back to the drawing board and come back at Mexico hopefully a bit better.”

Right now, it is unsure whether Vaessen will be joining them on the plane to Mexico after his injury. He had this to say about his race: “My start was pretty good, even with the last gate pick and I worked my way up through the field. However, on the really fast section of the track I hit a slippery spot and high-sided, landing on the take-off of the next jump. I didn’t really feel it immediately but when I got off the track, I realised I hit my shoulder really hard, so I rode back to the pits and went to the medical centre. They did an x-ray and saw that the collarbone was snapped. It was a clean break though, so that is good. Now when we get back, we will go to a good hospital in Holland and plan from there.”

It is disappointing for Vaessen to suffer this setback, but for Seewer and Lawrence, they head to Mexico both still motivated to improve upon their Argentinian performances. Even though he is leading the championship, Seewer is still looking to get better and better, especially as the GP in Mexico is at a circuit he’s done well at previously.