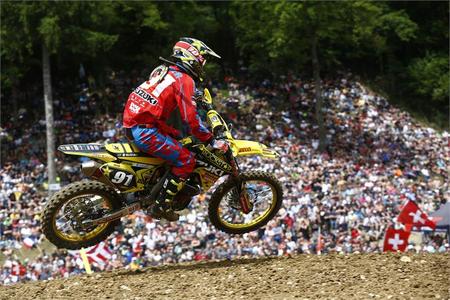 (PresseBox) ( Bensheim, 15-06-01 )
Rockstar Energy Suzuki Europe's Jeremy Seewer emerged from the Grand Prix of France and the eighth round of 18 in the FIM Motocross World Championship with eighth position overall.

Flying the RM-Z250 alone in the team's awning with the European EMX250 series on hiatus, the Swiss rode to 10th and sixth around the hilly hard-pack of Villars sous Ecot.

Seewer enjoyed support from Swiss sections of the vast 45,000 crowd due to the venue's proximity to the border and was familiar with the narrow, winding circuit that had also undergone some renovations for a first Grand Prix visit in more-than 30 years.

On Saturday Seewer had a busy time trying to pass Julien Lieber but was frustrated in his efforts and had to settle for seventh place in the gate for Sunday's two 30-minute and two-lap motos.

In the first gatedrop Seewer used the power of his works RM-Z250 to bustle through the pack. He was trying to make-up ground in the top-10 when he tagged Petar Petrov through one of the ruttiest and most technical corners on the track and was hit by Benoit Paturel. Another incident shortly after saw Seewer picking-up the Suzuki after being unable to avoid Jorge Zaragoza. Not enjoying the best feeling on the track '#91' was more determined in the second moto and had to deal with Alex Tonkov and Max Anstie at various stages. Eventually he took an improved sixth place after surviving the French mud in its roughest state of the weekend.

Seewer is seventh in the MX2 rankings and one point from sixth and just 10 from the top five.

Rockstar Energy Suzuki Europe will have the third round of the ADAC MX Masters at Bielstein in Germany to face next weekend before it moves to Italy and the revered Maggiora circuit for the ninth Grand Prix of 2015 and the half-way point of the campaign.

"I started the day well but after the warm-up I started to feel strange in my stomach, like I was about to throw-up and I couldn't eat that much and ended-up feeling a bit tired all day because of this. I don't know why...it is strange. I had a bad start in the first moto and I rode aggressively and made some passes but then ended up going down when Paturel hit me and then later I couldn't avoid Zaragoza who had crashed on the hill. I was really frustrated to finish out of the top-10 in that first one. My start wasn't great in the second moto again and we'll have to have a look at why that is. I came pretty fast back to sixth and had Anstie and Tonkov around me. I didn't feel great, like I was on cruise control. I know I can do a lot more. The result is just 'OK' from the second race and it is a shame it did not go so well today at a GP like this. I know my speed is there. I just have to put it all together and it hasn't happened in the last few races."