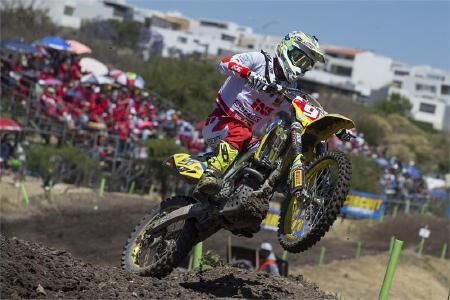 Jeremy Seewer and the Suzuki World MX2 team head back to Europe after a successful trip to Mexico, where the red-plated #91 Suzuki RM-Z250 rider extended his points at the top of the MX2 World Championship.

Held at the high altitude track in Leon, which is 1800m above sea-level, Seewer got out of the gate well in the first race, controlling it from start to finish for his second race win of his career. The second race didn’t quite go as well with him battling back from a top-10 place to finish fourth, tying him on points with overall winner Thomas Covington, just losing out on the second moto scores. However, his 43pts saw him extend his lead to eight points over Pauls Jonass as the series heads back to Europe for the next few months. It was a successful weekend and an important step for the team and rider to keep the red plate for more than one round, the first rider in 2017 to do so.

Seewer had this to say about the racing: “I did everything that I said I wanted to do yesterday. I just let it happen and the results came out well. I had a really good start in the first moto, we knew that I could do that after yesterday so I was pleased with that. Then I just put in some fast laps and felt good on my bike, I made a gap, and then took the win comfortably. It was nice to take a win in normal conditions, after my first victory which was in the mud in Indonesia.

The second moto, I had the same start in mind but it didn’t quite work out as well. I was pretty confident to get it done but sometimes it just doesn’t work out right. Still, I was in a decent spot, it was just hard to see the track and finding lines to pass those guys. Finally, I got to behind Julien Lieber and Jonass in fourth and then I passed Lieber which would have given me the overall, but I wanted to pass Jonass too. I got really close behind him, but that’s when I made a mistake. I went a little bit off my lines, came off the bike but avoided the crash. It wasn’t too bad, I lost a position though before I got back on and that dropped me back to fourth, which is where I finished.

It was nice to extend the points lead but a little disappointed that I didn’t win the GP. That would have been nice to come away with but keeping the red plate is the important thing, especially as we now head to Europe like this. I’m happy with it; I didn’t feel the pressure of it at all as it just looks so good on my bike and I just want to keep it there.”

With Bas Vaessen missing due to a broken collarbone, the only other Suzuki World MX2 rider was Hunter Lawrence, however he was struggling himself with illness that hasn’t been helped by all the travel and the altitude. Despite all this, Lawrence battled as hard as he could for both motos and was pleased that he was able to complete them without any incidents. Here is Lawrence’s verdict on the weekend: “First moto I didn’t have too bad a start, and with this illness I was just trying to last the full moto. It wasn’t too bad, I picked up a couple of positions, made some passes and finished 11th. No crashes, so I was happy with that.

“I then came back in, tried to reboot, recover as much as possible and go out for moto two. I got a similar start as moto one, mid-pack and tried to ride as best as I could, giving everything I had; the same sort of mentality as the first race. At the fifteen minute mark though, I was pretty already done, I had no energy or strength left so I ended up 14th. Not a bad weekend overall, today was good all things considered. Two motos in the top 15 with no crashes is not great but it gives me something to build on for when we get back to Europe.”

General Manager Stefan Everts was certainly happy with both riders, especially Seewer who managed to not just keep the red-plate but extend the lead in the process. “Jeremy really showed everyone what he can do in that first race. He tried really hard to do the same in second moto but made a mistake which cost him the overall which was a bit of a shame. Still, we go back home with the red-plate which is nice and the job that we all came here to do.

“Hunter had a tough weekend, with him suffering with the sickness but I was really happy to see him riding much better in the first moto. He was out there almost on his own, just riding his own race with no one around him. I think that’ll help him get back to a positive frame of mind, able to concentrate on his own performance.”

Now there is another weekend off before the series regroups on April 16th for the MXGP of Trentino at the stunningly beautiful track at Pietramurata, where Jeremy Seewer will once again be running the red plate on board his RM-Z250.