Seewer Almost Laps The Field On His Way To A Podium 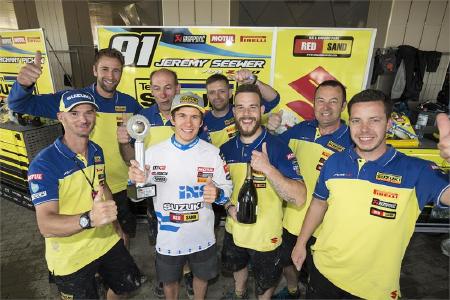 
Jeremy Seewer was just a few seconds away from lapping the entire MX2 field at the MXGP of Russia, as torrential rain hit the track early on in the afternoon. That moto victory was good enough to give the Suzuki World MX2 rider second overall as the championship moves past the halfway point of the season. Team-mates Hunter Lawrence and Bas Vaessen also put in good results in the treacherous conditions, both finishing inside the top five in the first moto. In the EMX250 class, Zach Pichon returned to action after his collarbone injury and put in two solid motos as he gets back to race shape.

Seewer had this say about his performance: “The whole weekend I felt good, the track was cool but then the rain started to fall a lot more than we expected, which made the whole race a bit of a lottery. It’s always like that in the mud and luck is a big part of the result. In the first moto I had a bad start and some google issues and while it was ok to ride, it was tough to catch up as once you got behind a rider you got splashed and it’s not very healthy for your eyes. In the second moto I just tried to survive and luckily got a good start and came around the first corner in third before the guys in front made some mistakes. The track was so bad, especially in front of the pit lane so it was hard for me to read what was written so I didn’t even know I had won. I wasn’t sure if Benoit Paturel had crashed out or not because I couldn’t see that and I was just so focused on my riding and then they told me that I nearly lapped everyone. I was pretty shocked with that.

“Second overall is decent enough, we didn’t lose too many points but of course the goal is to gain points against Pauls Jonass but he did well today and it’s not easy to beat him, but we’re not giving up and we’re going to try our best to make it happen in the next rounds.”

At times Lawrence was the fastest rider on the track on his RM-Z250 but after a great fourth in race one, he just wasn’t able to keep it on two wheels in the extremely difficult conditions in race two, as the wet mud started to dry off and stick to everything it touched. “The first race wasn’t too bad,” said Lawrence “the skies opened up before the race and we were getting hammered on the track; the rain really was unbelievable. I was able to finish fourth though which after starting off well down the field is really a positive thing. The speed is definitely there, and I didn’t mind the conditions, but then it got much worse for the second moto.