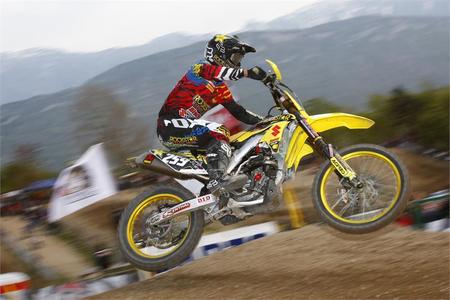 (PresseBox) ( Bensheim, 14-04-22 )
The FIM Motocross World Championship continues this weekend at the award-winning circuit of Sevlievo and the Grand Prix of Bulgaria; and in the premier MXGP class, Rockstar Energy Suzuki World MXGP's Clement Desalle - winner of last weekend's GP of Trentino - is second in the standings.

Team-mate Kevin Strijbos - owner of his first podium trophy of 2014 also in Italy with third place - is currently sixth, while in MX2, Rockstar Energy Suzuki Europe's Glenn Coldenhoff is in excellent form after three consecutive rostrum appearances, two moto victories in two GPs and second place in the points table, only six points behind Arnaud Tonus. Jeremy Seewer is becoming hot property with his top 10 finishes in his rookie season and there will not be a more determined rider on the track this weekend than Julien Lieber who will be anxious to get some speed and results under his belt and at the venue where he suffered his knee injury last summer.

We checked in with the two Suzuki riders that grasped chequered flags on Sunday in Arco di Trento. "The days after a race always feel better when you win! I shook out the weekend by doing some enduro with friends this week and it's been back to the normal regime in preparation for Bulgaria," commented Desalle.

The Belgian travels to the fast and hilly circuit with previous form. He won with the factory RM-Z450 there in 2011 and was inside the winner's circle with third position in 2013. "I like Sevlievo but the track is only as good as the amount it is prepared. If nothing is done then there is the danger it can get one-line and just full throttle. It would be nice to find something different. It feels like the layout has barely changed since we have been going there."

Desalle benefitted from some 2015 updates on his factory machine in Italy that brought extra performance to the bottom end of the power range and decreased weight thanks to the new chassis. The '#25' had tested the new material prior to the Grand Prix of Brazil and round three but was unable to run the components in Beto Carrero on the bikes that were already crated from Thailand to South America. A successful launch was made at Arco di Trento.

"We will see how it goes," Desalle assessed. "So far I'm really happy with the improvements they have made to the bike, the way it handles and the way it feels. We still need to have some more races with the material but it seems like we are on the good path."

Over in MX2 and Coldenhoff has raised the profile and spirit of the Rockstar Energy Suzuki Europe team with his fantastic spell on the RM-Z250. Along with Jeffrey Herlings and Arnaud Tonus, the Dutchman is setting the early pace in the 2014 title chase.

Said Coldenhoff: "Things are going well. We have a good position in the championship and to have three podiums in a row is a decent run of results. Importantly I beat Herlings and Tonus in the second moto in Italy last Sunday and we can take a lot from that. We have to remember it and use it for the next Grands Prix."

Coldenhoff's best result at Sevlievo was his seventh position obtained last year; surely a placing he will be able to better on this occasion. For 'The Hoff' the key to Sevlievo is all about the soil, which can veer from hard-pack to some tricky ruts and braking bumps. The weather forecast for the weekend is bright and sunny but rainfall is forecast in the days leading up to the Grand Prix, which might have an influence on the Sevlievo terrain.

"It all depends on how the ground is ripped and readied," he said. "Last year, for example, it was like a road race, whereas in previous seasons it has been slower and better. It is not one of my favourite circuits but I think we will again have a chance to do well."

Undoubtedly the synergy Coldenhoff has established with the Suzuki and the work made to the factory-backed motorcycle over the winter has been a crucial key to the progress made so far. The string of results since the start of the season has been the team's best in three years. "The Suzuki is working well and I like how I can move it around and do exactly what I want with it," he explained. "If there is one area we can still improve then it is the starts because we've had eight motos now and we're still waiting for our first holeshot. It is something we'll look to sort out as soon as possible."

The Grand Prix of Bulgaria will see Brian Hsu in action again on the RM125 in the second outing for the European EMX125 class. The team will again be full as Seewer and Lieber continue their personal stories in the MX2 GP campaign.