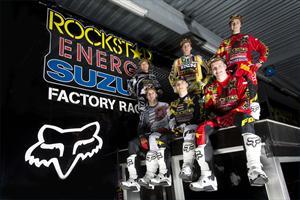 (PresseBox) ( Bensheim, 13-04-10 )
The FIM Motocross World Championship travels to Italy this weekend for round four of 18 and as the races are scratched off the calendar, so does the full force of the 2013 Rockstar Energy Suzuki Europe begin to reveal itself.

The Grand Prix of Italy will see current 85cc World Champion Brian Hsu steer the RM125 as the European EMX125 two-stroke series clicks into gear for the first of eight outings and then it is only a matter of weeks before the EMX250 campaign starts in Portugal.

The German factory-backed team is a living-breathing example of the pyramid structure that now exists in the sport with the idea that the best, most talented and most promising rise up to Grand Prix level and the MX2 category in the FIM World Championship.

For 2013 the Rockstar Energy Drink and Suzuki International Europe supported team can announce the presence of two new talented youngsters: Crisztian Tompa from Romania who rides the RM85 (after finishing third in last year's 65c Junior World Championship)and Gianluca Facchetti on the same two-stroke. The teenage Italian marked his credentials already with results of second and first last week in the first outing of his national championship. Up to the next level is 85cc World Champion Hsu who now pilots the 125cc machine vacated by exciting Spaniard Jorge Zaragoza. Hsu opens his account this weekend at the Arco di Trento circuit while Zaragoza is now part of the ultra-competitive feeder series to MX2 on the RM-Z250 and rides alongside Switzerland's Jeremy Seewer. The latter enters his fifth year of association with the team and, after wild-card MX2 GPs last year, is expected to be one of the front runners in the eight-round contest that kicks-off in Agueda on May 5th.

At the top of the tree is Max Anstie and Julien Lieber on the works RM-Z250s; Anstie ready for Italy on the back of obtaining his first top-three moto finish almost two weeks ago in Holland.

The eclectic group therefore involves an Italian, Romanian, Taiwanese-German, Swiss, Belgian, Briton and a Spaniard and encompasses every category for prosperous racers to move up the scales and levels to the pinnacle of motocross.

"I'm really happy to say that for 2013 we are able to bring a group like this together and through the various nationalities we can show that we're trying to help some of the best youngsters from across the continent and beyond," said Team Manager Thomas Ramsbacher. "This was always the goal of our project with Suzuki and various other loyal partners and when we look back on our history over the past six to seven years, then we've had some great moments when the kids have developed and arrived to the very top.

"It will be exciting to see what Crisztian and Gianluca can do on the 85s while Brian already made his mark in that category and faces his longest season to date," the German added. "Jorge is carrying an injury to his left hand and should be riding again in four-to-five weeks, which means he'll miss the Grand Prix in Portugal but should be fit for France. Jeremy is already at a level where we can expect him to go for the top-three in EMX250 and he will be riding in the MX2 Grand Prix this weekend for extra preparation."

The gaggle of teenagers is complimented by the experienced figure of 2012 Motocross of Nations winner Marcus Schiffer. The German is defending his national championship again this season on RM-Z450 technology and the 25 year old will make various MX1 Grand Prix appearances. If Schiffer enjoys another solid season then he could be in the frame again for a momentous weekend on September 29th at Teutschenthal for the 67th Nations on German turf.