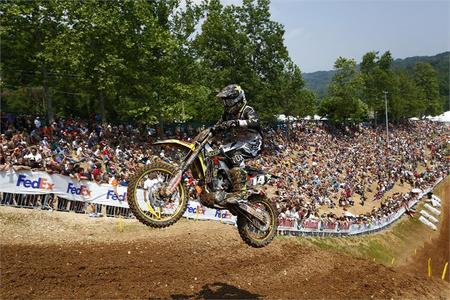 (PresseBox) ( Bensheim, 13-06-17 )
Rockstar Energy Suzuki Europe's Max Anstie and Jeremy Seewer both grabbed hard-earned points but endured some bad luck at the Grand Prix of Italy and the Maggiora circuit for the ninth round of 17 in the FIM Motocross World Championship today.

Maggiora was back as a Grand Prix host for the first time since 1999 and after renovations and redevelopment to the site - that has gained mythical status for the crowds and atmosphere at past events - the circuit north of Milan again shook to the sounds of a busy 38,000 crowd.

Anstie showed flashes of promising lap-times and ran inside the top six in both free practice sessions. The Brit was unfortunate to be held-up at the start of the first GP moto and pushed from the bottom half of the pack to reach 13th place. His poor luck with starts continued in Moto2 as a second corner pile-up affected both '#14' and his team-mate. Anstie recovered his factory RM-Z250 but then couldn't avoid another rider in front of him and suffered a heavy fall that left him battered and the Suzuki worse for wear. At that point Anstie was forced to retire.

Seewer used the Grand Prix for further practice and training on the RM-Z250: The young Swiss will be in action in Germany next weekend and then prepping for the third round of eight in the European EMX250 campaign in Sweden where he is second in the championship with two podium results. The teenager had to withdraw from Moto1 after a tumble and then rear brake failure while the same melee that held-up Anstie in the second moto also caused Seewer to hit the ground. But he saw out the moto to at least claim two points for 19th

The team now heads back to Germany to prepare for the third meeting in the ADAC MX Masters series at Aichwald before embarking on a three-week, three-race trek taking in Grands Prix at Sweden (Uddevalla), Latvia (Kegums) and Finland (Hyvinkaa).

"Not a very good day. I got out of the gate pretty good but something happened in the first corners and I went up the hill with what felt like most of the pack in front of me again. I was trying so hard but on this kind of track sometimes you just need to calm down a bit. I had a different approach to the second race but I bogged a bit on the start and then on the second corner loads of us crashed. I got back up and thought 'let's go and dance' because my speed was good out there. I followed a guy up the hill and he went completely sideways and I just smashed into him. The bike hit me and I was upside-down on the hill. I smashed my leg and winded myself. The bars were damaged and the bike was bent. I went to the pits but I was two laps down by then. The tide has to turn at some point because we have done so much work. We are flat-out and I just need to bring it together and stop struggling."

"Hard day and not my weekend! I didn't have the speed on Saturday. My start was not perfect for the first moto because the track had been watered and it was really slippery. I crashed and then had to stop after about 15 minutes because my rear brake broke. In the second moto my jump from the gate was much better, but because I was in 21st position I was pushed wide. Then in the second corner Romain Febvre crashed just a metre in front of me and I went down also. A few people rode over me and the front brake was locked when I picked up the bike...no luck."