Eight for Jasikonis in Valkenswaard Qualifier 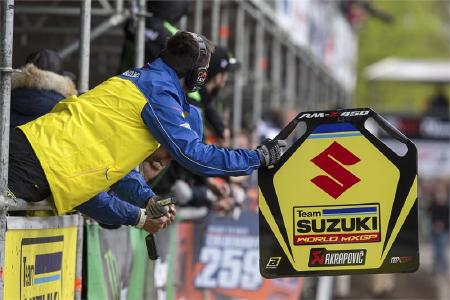 (PresseBox) ( Bensheim, 17-04-24 )
Arminas Jasikonis put in a great qualification race at the MXGP of Europe to finish in eighth place, battling and passing a lot more experienced riders in the deep sand track at Valkenswaard in the Netherlands.

In overcast conditions, Kevin Strijbos, Hunter Lawrence, Jeremy Seewer and Zach Pichon also battled hard for every position at a track that had been altered slightly for this year’s MXGP.

For Jasikonis though, this was another positive step in a season that is steadily improving race by race: “The start was better this time and I was running and passing so many good guys. I was feeling good physically, my bike setup with the RM-Z450WS was really good as we improved that during the week and everything was going good as I came up to fourth place. Then I lost concentration and made a little mistake and I dropped back to 10th but made a couple of passes at the end to end up eighth. It’s good though, to finish there with a crash and it’s much better to crash today than tomorrow. Hopefully I’ll put it all together for the main races.”

Unfortunately, his teammate Strijbos is fighting to get healthy after an injury last weekend, forcing his way into the top 20 in today’s qualification race. “It was not a good day, I didn’t ride this last week because of an injury. I have a tear in a muscle in my right elbow and after Italy I was in a lot of pain so I went to the hospital and they spoke about surgery but I don’t want to get surgery at the moment. I would prefer to fight through the pain and only get surgery if it gets a lot worse. However today was a lot worse. I didn’t ride in the week to try and help it heal but it didn’t heal and it was quite painful riding today. It was one big struggle really, every time I got cramp in my forearm and it was difficult to hold on. I’m going to go home now and get some treatment and hope for a small miracle for the motos tomorrow. It’s going to be tough, but let’s hope for the best. The RM-Z450WS got me off to a great start today and I hope it can do the same for the races.”

In the MX2 class, it was rookie Lawrence who was the top performing RM-Z250 rider in a race where a smooth strategy proved a good one as riders around him were making mistakes: “We got off to a pretty decent start, I was around 15th and made a few passes, got into a good rhythm and brought it home. I didn’t take any risks and just rode quite a calm race. I didn’t push too much or ride over my head and ended up 12th. It’s not a bad gate pick for tomorrow and better than what I qualified in from timed practice, so we’ll take it and I’m looking forward to the motos. I’ve got more in the tank and I should be good for this special Valkenswaard GP.”

Unfortunately, Seewer was one of the riders who suffered from a couple of mistakes but the former red-plate holder is still feeling confident that mounted on his RM-Z250, he can challenge at the front of the field tomorrow: “The start was OK, around 10th, but everyone is always very fast in those first few laps and it’s difficult to make the difference and make passes. I tried to do it though, I tried some new lines to pass them and get up front but then I made a small mistake which wasn’t so big but it took me 30 seconds to start my bike so I dropped back to last place. Then I came back through the field and as I was going to pass someone after the finish line jump they stuck out a yellow flag so I had to brake really hard and stalled. By the time I restarted my bike I was back in 40th place or something again, so I just decided to put my head down and ended up running a really good pace, same as the leaders even in traffic and finished in P19. It was a pretty positive ending as for the gate pick it doesn’t matter too much for tomorrow. We’re going to go all-in for the start in the motos and hope to be up front and if we do that, I’m feeling pretty confident we can get some good results.”

As well as the MXGP and MX2 classes, Valkenswaard is also hosting the second round of the EMX250 class where young French rider Pichon is representing the Suzuki World team. Although he faced some adversity in practice, he fought through it and ended up scoring some more points in this highly competitive field: “The day didn’t start too well with the timed qualification as I had a bike problem after one lap which meant I had to ride the spare bike. Thankfully both RM-Z250s that I ride are really good and even though I was a bit stressed that I had to pull into the pits and change bikes, I was still able to put in a time that was 18th in my group, 36th overall, which got me into the races.

I knew the races would be difficult with this gate pick but I got a good jump and started just outside the top 10. I moved forward into the top 10, making a few passes in the middle of the race but then I made a few mistakes, got a bit tired and dropped down a bit and finished 16th. I had good speed in the beginning but I need to learn and work on my fitness but it’s still a good race and tomorrow we have another chance to do well.”

Each rider knew they were in a battle today but never gave up and head into Sunday with the belief that they can do even better tomorrow. This is especially true of Jasikonis who is extremely excited to get out on track again and continue his improvement and climb up the MXGP championship table.