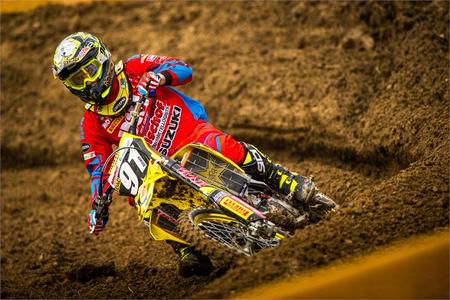 (PresseBox) ( Bensheim, 15-06-10 )
Rockstar Energy Suzuki Europe's Jeremy Seewer led a Suzuki clean sweep of the podium at the weekend's third round of the ADAC MX Masters at Bielstein in Germany.

Twenty-year-old Seewer, who set Pole Position on Saturday with his best lap-time of 1:56.625, took control of the first moto on Sunday, but not long into the race he had to respond to a challenge from team-mate Coldenhoff. "After I managed to get by Glenn and was back at the front, I was able to establish a small gap and bring home the win," Seewer said.

It was the same scenario in race two with his Dutch rival on the gas and determined to leave Seewer behind. But just when the 7000 fans expected to see the series leader take the moto and overall victory, disaster struck: The 24-year-old collided with another rider in a rut and crashed.

Said Seewer: "There's certainly been some luck on my side. But I was there when it mattered and could get back to the front. Taking the Pole Position and two race wins is perfect, especially with the 250cc machine against the bigger bikes. No complaints if things keep unfolding like this," added the Swiss rider who has now moved-up into third place in the series standings.

Coldenhoff was still content with his pair of runner-up results. He said: "The incident with the fallen rider at the end of the second moto was embarrassing for sure. I was leading the race and probably on my way to win, but I collected a lot of points and did increase my lead. The title is the goal and being 25 points in front looks promising."

The successful Suzuki weekend in the Masters category was completed by defending champion Dennis Ullrich, the 21-year-old finishing third in both motos. He said: "Unfortunately my starts weren't that great. I moved into third in both motos, but my colleagues were too far ahead."

The ADAC Youngster Cup saw another Suzuki triumph as German-Taiwanese Hsu landed two moto victories and took the championship lead. He said: "This win didn't come easy. The competition was riding well so I had to give it my very best. I'm extremely delighted having taken the overall win and the series lead. I'm really looking forward to the next round at Aichwald: I'm a member of the club and really like the track."

Thomas Hannecke, team manager of Team Rockstar Energy Suzuki Europe said: "That result is a dream for us. Both of our team riders were on top, then add Dennis Ullrich to the podium picture, there's nothing to complain about. Brian Hsu impressed with his moto wins in the Youngster Cup and took the points lead, which is perfect. It's been an all-around pleasant weekend. Thanks to the riders, the sponsors and all of our team staff, who are working so hard for our success."

The next round of the ADAC Masters series will be held on June 27-28th at Aichwald.