New dimension for the future of forging 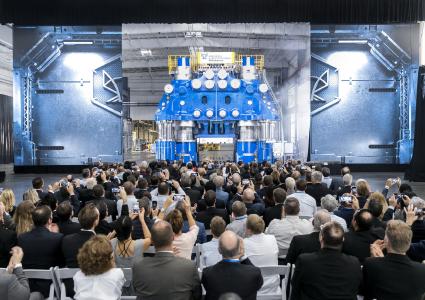 (PresseBox) ( Düsseldorf, 18-12-10 )
On October 23, 2018, OTTO FUCHS Group celebrated the grand opening of its new 60k die forging press at the location of its U.S. subsidiary Weber Metals in Paramount, California. It is the largest single investment in the company’s over 100-year history. Numerous guests from industry, economy and politics attended the opening ceremony. Completely set up by SMS group (www.sms-group.com), the new press, with a force of 540 MN (60,000 short tons), is the worldwide strongest and most advanced hydraulic pull-down die forging press in pit-mounted design.

“The new forging press from SMS group is our flagship and will ensure the competitiveness and also the technological leadership of OTTO FUCHS for the next 30 years,” says Dr.-Ing. Klaus Welschof, Head of Aerospace Division, OTTO FUCHS KG.

In the course of the event, visitors had the opportunity to experience the dimensions and the unique power of the press. The high-ranking representatives from economy and politics as well as those from SMS´ customer OTTO FUCHS and Weber Metals were equally impressed and excited. In total, SMS group used about 9,000 tons of steel to build the plant, which is more than once used for the Eiffel Tower.

SMS group was responsible for the mechanical equipment, electrical and automation systems, hydraulic equipment as well as the complete erection of the plant including commissioning. Forging of first reference pieces was also part of the supply scope. The forging results were impressive right from the beginning, confirming the success of the partnership-based cooperation and meticulous planning coordination between Weber Metals and SMS group.

“The SMS slogan of being the ‘Leading partner in the world of metals’ has definitely proved to be true. For the construction of this press, we had to make our choice from several partners and decided in favor of SMS because they came with a vast range of know-how which perfectly complemented that of our company. SMS complied with our wishes, and jointly we have built something really great,” says
Dr.-Ing. Hinrich Mählmann, personally liable partner of
OTTO FUCHS KG.

Anyone standing in front of the press during the opening ceremony could hardly imagine the routes the giant steel parts had gone. The huge components had mainly been manufactured in Europe and Asia and then been shipped to the U.S.A. according to a masterpiece of logistics and planning. In particular, the items concerned are 34 cast and forged parts with weights between 100 and 330 tons installed in the press. Also, the earth and installation work, and the auxiliary assembly aids specifically designed for this project, were record-breaking.

Size is not an end in itself

The die forging press, also named 60k press as it can exert a force of 60,000 short tons (U.S.), will serve Weber Metals to make products for the aerospace industry from forged aluminum and titanium. Forgings of these high-performance materials are used in the fuselage, in the wings, the undercarriage and the engines. The size of the plant is not an end in itself nor does it serve the pursuit of world records, but follows a clear future-oriented strategy: The new die forging press opens up completely new perspectives to designers and manufacturers in the aerospace industry for larger, weight-opti-mized but also structure-optimized components that offer increased safety at less weight. In the future, such parts will allow for the design of aircrafts featuring higher transport capacities, improved safety and minimized fuel consumption. These new, larger and lighter compo-nents are key to the future of mobility. Moreover, thanks to its enormous forging power the plant can shape even new high-strength and ultra-high-strength materials. Companies able to offer such raw materials will find markets that could not be served so far, which means clear competitive advantages and added value. SMS group supports customers in tapping this potential by providing plant solutions and tailored technology and to enable its customer, like OTTO FUCHS in this case, establish in promising markets.

Not only strong, but also highly precise

The hydraulic die forging press has a force of 60,000 short tons (U.S.) and a die clamping area of 6,000 x 3,000 millimeters. The working stroke is 2,000 millimeters The press is designed for hot and cold forming. An essential feature of the press is its balancing system with latest valve technology and highly sensitive electronics being perfectly harmonized and interacting. The result is extremely high precision in the forging operation.

SMS group is a group of companies internationally active in plant construction and mechanical engineering for the steel and nonferrous metals industry. It has some 14,000 employees who generate worldwide sales of about EUR 3 billion. The sole owner of the holding company SMS GmbH is the Familie Weiss Foundation.