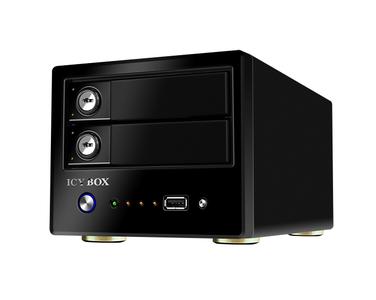 (PresseBox) ( Ahrensburg, 10-02-22 )
Ever more home networks with each day, ever bigger data with each day. That means increasing demand for NAS which are easy to handle, NAS for everybody, and which can serve as media-stations. NAS-specialist RaidSonic showcases two of these and one more classical NAS.

ICY BOX IB-NAS6210 and IB-NAS6220
These NAS set up themselves more or less automatically. Thanks to a web-browser based user-interface even lay-people won’t have a problem. The same interface appears when go to the website www.myicybox.com. That’s a cool way to enjoy videos, music and photos stored at home on the NAS anywhere in the world – driving to work, on a vacation or on a business trip. Using a mobile media-player like iPhone, Playstation or the like you don’t have move your data anymore to update your playlists.

You can mount one HDD into the ICY BOX IB-NAS6210 and two HDDs into the NAS6220. That’s very easy with the new patented trays. Buffers of silicon hold the HDD – it’s shock absorbing and screw-less. Both NAS offer one Touch Backup and RAID 1. Therefore IB-NAS6210 has to be connected to another HDD per eSATA. IB-NAS6220 also has RAID 0.

You can share the ICY BOX media server. You can store several media collections – let’s say of an entire family - on this ICY BOX and each member may use them.
The servers available with the ICY BOX media-station are Samba, UP’n’P, iTunes/Bonjour and FTP. The NAS collaborate with Time Machine.

Beflügelt von der aktuellen Corona-befeuerten Digitaltechnologie-Euphorie stellte Dell EMC auf der jährlichen Dell Technology World gleich ein ganzes Bündel von „APEX“-Services vor. Zweiter Schwerpunkt der Veranstaltung waren intelligente Technologien für das Edge. read more
The publisher indicated in each case is solely responsible for the press releases above, the event or job offer displayed, and the image and sound material used (see company info when clicking on image/message title or company info right column). As a rule, the publisher is also the author of the press releases and the attached image, sound and information material.
The use of information published here for personal information and editorial processing is generally free of charge. Please clarify any copyright issues with the stated publisher before further use. In the event of publication, please send a specimen copy to service@pressebox.de.