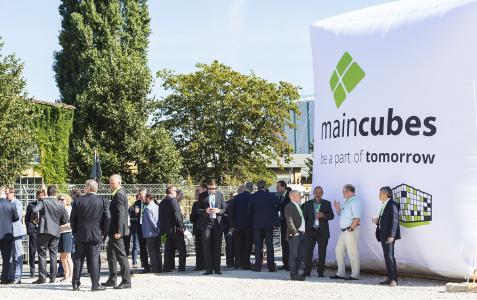 (PresseBox) ( Frankfurt am Main, 16-09-05 )
Frankfurt-based data center operator maincubes laid the foundation stone for the new high-performance data center in Offenbach near Frankfurt on August 30, 2016, accompanied by representatives from local politics, investors, partners and future customers. At the foundation stone-laying ceremony, the speeches were made by Horst Schneider, Mayor of Offenbach, Günther Weiß, EVO Board of Management, Stephan Lang, Managing Director of ICT Facilities and Oliver Menzel, CEO of maincubes. Following the official ceremony, a presentation on the capability of the new high-performance data center was given by Albrecht Kraas, CTO of maincubes.

The new architectural concept for the data center, which has already won awards, made quite an impact on the approximately 100 guests invited to the event. At the same time, they were impressed by the performance data, which raises data center operation to a new level. Likewise, by the fully new quality of the premium services. Data center operators now have to offer CTOs and CIOs more than just good facilities and technical equipment.

“For us, the foundation stone-laying ceremony was another milestone in the creation of a totally new class of data centers. maincubes one is already half-built and will start operation next year after the interior has been completed. Our actions are endorsed by the many guests at the celebration of the laying of the foundation stone. We are on the right track, since in the future companies and those in charge of them need more than just one building and a well-functioning data center infrastructure. In order to run their IT optimally, they need a higher level of security combined with premium services”, says Oliver Menzel, CEO of maincubes, clearly pleased with the extremely well-attended event for the laying of the foundation stone.

The maincubes data center is going up on a site of almost 5,600 square meters in Offenbach. This is around 4 kilometers from the metropolis of Frankfurt am Main and therefore in close proximity (approx. 800 meters) to one of the largest Internet exchange points (DE-CIX) in Germany. maincubes one data center is a Tier 3 data center that will be completed in 2017. maincubes one is significantly improving the relationship between performance and economic efficiency through an innovative combination of technology and architecture, which dispenses with bothersome pillars or walls, for example. The new maincubes one data center reaches a significantly higher level of efficiency than traditional data centers. Customers are guaranteed power usage effectiveness (PUE) of less than 1.35 for power of up to 2 kilowatts per square meter.