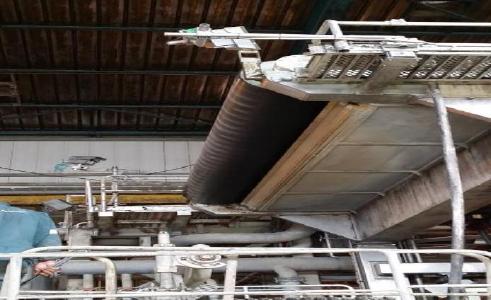 (PresseBox) ( Darmstadt, 17-08-31 )
For the PM4 paper machine in its paper mill in Venizel, SAICA is making full use of the web inspection system (WIS) and web break monitoring system (WBM) from ISRA VISION. What is remarkable is the system's short amortization period after only a mere year and half as well as the timely reduction in the number of web breaks. In addition, the system also helps to optimize manufacturing processes.

The paper market in France is extremely competitive. Ten different companies produce around 3.3 million tons of corrugated medium and liner paper on a total of 19 paper machines. One of those manufacturers is SAICA, a leading producer of paper-based packaging in Europe and the market leader in Spain. The packaging operations within this group procure the majority of their raw materials from their own paper factories.

SAICA's Venizel plant, located 100km north of Paris, is where their brown corrugating medium and liner paper between 115 g/m2 and 250 g/m2 is produced. This paper is further processed in the group's own corrugated paper factories as well as in those of third parties. The requirements of corrugated paper manufacturers which paper producers must fulfill relate in particular to the paper's ability to be machine processed without breaking while guaranteeing good product quality. "Our main objective is to be able to supply paper without any major defects such as holes, spots or edge breaks, which might be the cause of breaks in the corrugated paper machines" emphasizes Renaud Guilianelli, Mill Manager at SAICA in Venizel.

To meet these customer requirements and in order to increase in-house productivity, SAICA made the decision to install an ISRA VISION web inspection system (WIS) and a web break monitoring system (WBM) in its PM4 paper machine. These prevent any further processing of defective products that might result in web breaks on the group's own systems as well as on those of its customers.

The WIS system at SAICA consists of four IntelliCam intelligent cameras, a cabinet, a server and two quality terminals while the WBM system is comprised of nineteen IntelliCams, a junction box, two camera boxes, a server PC and two process terminals. The cameras are distributed along the entire system and can therefore monitor every critical processing step. The cameras provide crystal clear images and detect even the smallest irregularities at maximum production speeds. As a result of the perfect camera synchronization and the precise online video information, an analysis of the root causes for defects can be run in mere seconds.

The WBM system monitors production across the entire width of the 5 m web at high speeds of 800 m/min. "The WBM IntelliCams are exactly the right tools for paper manufacturers, giving them the capability to identify defective areas that might cause problems in the paper machine", R. Guilianelli continues. Coupling with the WIS, the WBM becomes a powerful root cause analyzer to prevent breaks. “This year, we succeeded in significantly reducing the basic weight while increasing our productivity”, R. Guilianelli underlines.
The special features of the IntelliCam are the high-resolution camera and the LED lights providing extremely bright 800 W strobe lighting, integrated in a rugged high protection category enclosure. The IntelliCam provides for a customized and easy installation anywhere on the paper machine. An automated wiper or brush cleaning system integrated in the IntelliCam guarantees consistently perfect image quality and reduces the cost of maintenance to a minimum. In addition, the intelligent cameras are equipped with a cooling system that allows them to be installed in outside temperatures of up to 110 °C.

Two “easy to operate” software solutions are installed, which can be used on two extended monitors at the same time. The modular characteristic of the WIS and WBM system makes it possible to easily integrate additional IntelliCams at a later time.

The paper manufacturer's own trained staff performs the maintenance tasks and a VPN connection allows for remote access to the system so that more complicated maintenance tasks can be performed by ISRA off-site.

With the ISRA VISION WBM system, SAICA is able to significantly reduce the number of breaks due to the system's ability to warn of the risk of any breaks automatically, in a targeted manner and at an early stage. This minimizes the number of times the system is at a standstill, thus reducing the cost of production losses. "The WIS-WBM system ensures that we are able to increase our productivity and improve quality", concludes R. Guilianelli. In his opinion, there are "clear objective arguments for the necessity of this investment".

For his machine, the mill manager is forecasting an annual production of 250,000 tons, meaning the WIS-WBM system will have amortized within a mere eighteen months, based on the conservative assumption that the number of breaks is reduced by at least 20 percent.

“Depending on the detected defect type, we have significantly optimized our cleaning time and frequency. Consequently, the number of web breaks has been reduced and our machine runnability improved considerably” confirms the responsible processing engineer Yassine El Kartouti.

To summarize – Easy to install, easy to set up, easy to use: The productivity of the machine is significantly improved.

ISRA VISION enters the future with a new management team