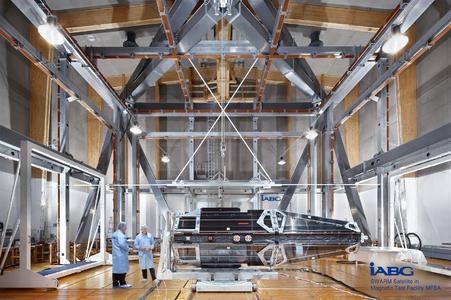 (PresseBox) ( Ottobrunn, 12-02-17 )
On Friday, 17 February 2012, IABG's space centre in Ottobrunn opens its gates for national and international media representatives and grants access to the three satellites of the Swarm fleet which underwent an extensive test programme in IABG's test facilities.

At the same time, this is the last opportunity to see the satellites before they are prepared for transport and subsequently shipped to the Russian launch site Plesetsk, from where they will commence their service in outer space.

In the context of this information meeting, well-known representatives of ESA, Astrium GmbH and IABG will outline to the guests all the details about the Swarm satellites, their mission and the testing campaign they have undergone with IABG. The program will culminate in a clean room tour in IABG's space centre where the satellites can be viewed. Press representatives will have the opportunity to film or take photographs. In addition, our experts will be available for individual interviews.

IABG has been performing an extensive qualification programme for ESA's Swarm Satellite constellation on behalf of Astrium GmbH, Friedrichshafen, since mid-2009.

The testing campaign covered vibration, acoustic and shock tests, tests on electromagnetic compatibility, thermal vacuum tests including sun simulation as well as the determination of mass properties. An important milestone in the qualification of the flight models was the investigation of the magnetic characteristics in our magnetic field simulation facility (MFSA), which is unique in Europe.

The Swarm satellite fleet, a project in the context of ESA's Living Planet Program, consists of three identically constructed satellites, equipped with highly precise research instruments. Their task is to perform high-resolution measurements of the earth's magnetic field at a height of approx. 500 km above the earth's surface. The high-quality data generated in the process permit an exact modelling of the earth's magnetic field and thus contribute to a better understanding of the processes in the earth's core as well as the composition of its crust.

IABG is a leading European technology enterprise. Our main focus lies on trend-setting high technology and science applications. We plan, implement and operate. With more than 1,000 experienced and committed employees we offer our customers solutions in the sectors Automotive, InfoCom, Transport, Environment & Energy, Aeronautics, Space, as well as Defence & Security.