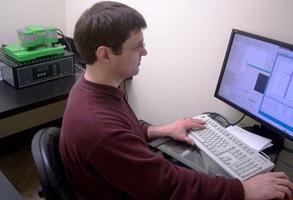 (PresseBox) ( Berlin, 11-06-07 )
JPK Instruments, a world-leading manufacturer of nanoanalytic instrumentation for research in life sciences and soft matter, reports on the work from the Pharmaceutical Sciences Department of the Medical School at the University of Nebraska. The Department have selected the JPK ForceRobot® 300 system to extend their studies applying atomic force microscopy, AFM, in the measurement of single molecule force spectroscopy.

Professor Yuri Lyubchenko heads a research group at UNMC in genomics. Their goal is to unravel the role of the DNA dynamics at different levels as key mechanisms for various DNA functions including gene regulation, DNA recombination and the mismatch repair with the major focus on DNA recombination. The misfolding and aggregation of proteins are widespread phenomena leading to the development of numerous neurodegenerative disorders for which there is currently no cure.

Lyubchenko's group has published widely using AFM as both a direct and complimentary tool to advance their understanding of biological processes, some of which are relevant to human health. Single molecule force spectroscopy is used to study interactions between peptides and proteins involved in the development of these neurodegenerative diseases such as Alzheimer's and Parkinson's diseases. AFM helps to bridge the gap of various techniques which are capable of looking at the complex processes of protein misfolding and aggregation. However, it has the drawback of being very time and labor consuming to make measurements. This has been solved by the introduction of JPK's ForceRobot® 300 system into the group.

One of the key researchers in the group is Dr. Alexey Krasnoslobodtsev. He did his first degree in Chemistry at NovosibirskStateUniversity before completing his PhD at the New MexicoStateUniversity. Speaking about his research, Krasnoslobodtsev says "AFM is my instrument of choice in my work towards a better understanding of these protein misfolding and aggregation phenomena. By measuring strength of interactions between protein molecules, it is possible to detect pathological misfolded conformations of proteins which are capable of triggering aggregation. Such conformations are characterized by elevated propensity to interact with one another. It is hoped that better understanding the mechanisms underlying self-assembly of proteins and peptides into nano-aggregates of various sizes and morphologies would eventually facilitate the development of efficient therapeutic and diagnostic tools for diseases associated with protein misfolding."

He continues: "The first time I saw a presentation about ForceRobot was at the Biophysical Society meeting in 2007. I remember sharing my excitement with my colleagues in the lab after I got back. The ForceRobot seemed to have the ability to take over the tedious routine manipulations like data acquisition and analysis leaving more time for conceiving ideas and thinking about science. Although, much is still in the hands of the researcher, for example sample preparation and data interpretation, automated data collection makes it much easier to carry out an experiment. For example, when I come to work in the morning and find ForceRobot (which was left running overnight) is about to finish collecting thousands of force curves, I feel really excited because I can look at the data right away."

JPK develops, engineers and manufactures instrumentation in Germany to the world-recognized standards of German precision engineering, quality and functionality. For further details of the ForceRobot® 300 and other products in the JPK family of nanoscale characterization instrumentation, please visit the JPK web site, www.jpk.com and Facebook.

JPK Instruments AG is a world-leading manufacturer of nanoanalytic instruments - particularly atomic force microscope (AFM) systems and optical tweezers - for a broad range of applications reaching from soft matter physics to nano-optics, from surface chemistry to cell and molecular biology. From its earliest days applying atomic force microscope (AFM) technology, JPK has recognized the opportunities provided by nanotechnology for transforming life sciences and soft matter research. This focus has driven JPK's success in uniting the worlds of nanotechnology tools and life science applications by offering cutting-edge technology and unique applications expertise. Headquartered in Berlin and with direct operations in Dresden, Cambridge (UK), Singapore, Tokyo and Paris, JPK maintains a global network of distributors and support centers and provides on the spot applications and service support to an ever-growing community of researchers.