Presentation of the BMW Group Award for Intercultural Commitment 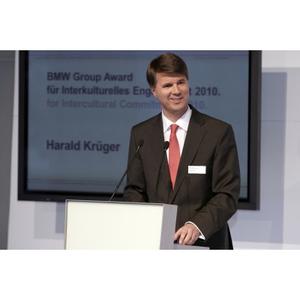 (PresseBox) ( Munich, 10-11-19 )
The international BMW Group Award for Intercultural Commitment was presented for the first time on Thursday. The three winners were announced by Harald Krüger, member of the BMW AG Board of Management and Award Chairman, at a gala evening ceremony hosted by Susanne Kronzucker in the BMW Museum.

The three projects that managed to convince the jury of six experts in the final round of judging that afternoon were the Brussels-based project "BELIEFORAMA", the intercultural Gartenpolylog from Austria and Israeli training program "Hand in Hand". The seven finalists who were still in the running at that point had already competed successfully against some 300 other submissions from more than 40 different countries.

Organised by the BMW Group, this international competition supports individuals and initiatives that are committed to enhancing relations between people from different cultural, religious and linguistic backgrounds. Winning projects have been awarded prize monies totalling €25,000 and will receive active support from the BMW Group for a period of one year.

The winner of the first prize was "BELIEFORAMA", which convinced the jury with its flexibility and its members' own willingness to learn. This training program works at pan-European level to ease tensions in multicultural communities and promote and maintain social cohesion. The jury panel was particularly impressed by its proposal and implementation concept for a "Religious Diversity and Anti-Discrimination" training program. BELIEFORAMA provides effective support to educators wanting to establish a climate of respect and tolerance between different cultures and religions in the workplace. The concept has the potential to develop into a social enterprise with a broad European perspective.

Second place went to the Gartenpolylog group from Vienna, who won the favour of the jury because its concept can be transferred to a range of different contexts. The "Gartenpolylog - Intercultural Community Gardens in Austria" project encourages people from different cultures to mix by engaging them in collaborative, hands-on activities. Anyone who is interested in gardening and open to intercultural dialogue with people from all walks of life can get involved. In the intercultural gardens, different backgrounds are seen as a form of enrichment. What began on a minor scale in a public park has grown into a successful franchise that has been since become established in a number of Austria's federal states.

In third place came the initiators of the "Hand in Hand - Building Tomorrow's Leaders" project from Israel. Initiated by the Israeli Center for Jewish-Arab Education, the "Hand in Hand" project has a practical focus and gives school leavers from different religious backgrounds the chance to undertake solid vocational training. "Hand in Hand" won the special praise of the jury for never having wavered from its conviction - even in a difficult and sometimes even dangerous social and political environment - that Arabs and Jews have a future together, provided they live in an integrated society offering the younger generation equal opportunities in education and career development.

Partnership for stability and sustainability

The importance of corporate intercultural commitment was highlighted in a speech by guest speaker Jean-Christophe Bas, Senior Adviser to the UN initiative Alliance of Civilisations. "The Corporate sector has become a critical force in promoting cultural understanding, building bridges between cultures and people. With its commitment the BMW Group demonstrates a pioneering and visionary role and is situated at the forefront."

The winning projects were selected by an international jury of six highly qualified and renowned experts from a wide range of intercultural disciplines:

As part of the BMW Group Award for Intercultural Commitment, a photo exhibition entitled Diversity as Enrichment was opened. It presents the work of three young photographers who documented intercultural teamwork at the BMW production site in Munich, where employees from 56 different nations work together as a team. The exhibition will be on show at the BMW Museum in Munich until spring 2011.

To find out more about the competition and its terms of entry, visit: http://www.bmwgroup.com/award.