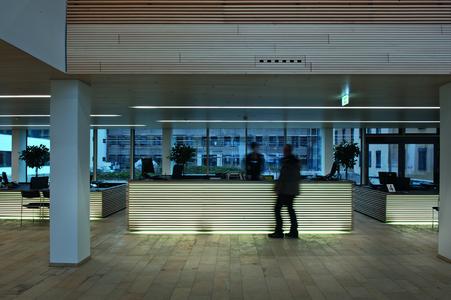 (PresseBox) ( Dornbirn, 11-05-10 )
The Marktoberdorf administrative district office now welcomes visitors in bright and modern rooms including open service areas. When people enter the large foyer that is as bright as daylight, they cannot help noticing the building's distinct service character, which is nevertheless new to many visitors. At the end of March, the first construction phase of the extensive refurbishment of the administrative district office was completed. The successful transformation of the building's atmosphere is largely due to the new lighting concept developed by Zumtobel: clients are guided into the foyer and directed to the citizens' service point by light lines; pendant luminaires provide pleasantly uniform lighting for task areas in the offices, while the corridors have been fitted with batten luminaires to create exciting accents and facilitate orientation.

The target of the first redesign phase, which included the addition of a new eastern wing to the building as well as refurbishment of the southern wing, was to transform the administrative building into an advanced service centre in terms of both technology and design. Particular attention was therefore placed on using energy-saving building services and resourcesaving measures. "The lighting concept played a decisive role in the refurbishment process", explains lighting designer Ernst Körbl of the Körbl + Feneberg GmbH engineering office. He further adds, "Zumtobel's advanced luminaires consume considerably less energy despite providing better lighting quality, so that the administrative district office is able to save up to 43 percent of energy per year, compared to the former lighting system."

For three decades, the building complex covering approx. 9,500 sqm had remained unchanged. Many parts urgently required refurbishment. The citizens' service point, conference halls and office rooms in particular were fundamentally renewed, while the floor space - for the new citizens' service point, among others - was increased by some 2,300 sqm. The architects' studio of Stadtmüller.Burkhardt.Architekten was in charge of structural measures: "We placed particular attention not only on combining new and old parts of the building and modernising them in terms of architecture, we also wanted to improve the quality of work for the staff members and create a pleasant atmosphere to make visitors feel welcome", explains architect Wendelin Burkhardt.

The administrative district office's new style is considerably distinguished by nearly 500 metres of light lines. Flush-mounted in the ceilings of public spaces and circulation areas, the delicate Slotlight light lines provide beneficially uniform ambient brightness. So-called Tetris technology incorporating the overlapping arrangement of T16 light sources and a separate white painted sheet steel reflector provide uniform light distribution barely interrupted by shadows. PMMA luminaire covers were used to obtain perfect lighting conditions at the desks of the citizens' service point, without producing any annoying reflections on the screens. Therefore, the light lines can also be arranged freely anywhere in the room, regardless of the position of the workstations.

For the outer façade of the new building and for panelling the interior walls, the architects used mainly wood as locally available basic material, while the floors were clad with natural stones.

At the same time, built-in fitments that were no longer required were removed or replaced with transparent structural elements, which makes the rooms appear more open, adding a distinctive contemporary service character. The combination of photovoltaic system, new cabling, new air-conditioning system and triple glazed windows to improve thermal insulation, together with a complete redesign of the lighting concept, ensures optimised operation.

For the office workstations, the electrical designers opted for a luminaire ensuring high light output ratio and glare control levels in conformity with relevant standards. These requirements are met by the Claris II louvre luminaire, which is able to add an appropriate atmosphere of direct/indirect lighting to the premises. The straight-line pendant luminaire in minimalist and consistent design boasts a particularly compact body. With light output ratio levels of up to 93 percent, Claris II meets the high requirements placed on energy-efficient solutions, nevertheless providing first-rate visual comfort. This solution perfectly combines a pleasant room ambience ensuring a good working atmosphere and energy-saving building operation.

In addition, the formerly dark corridors are now brightened up by fresh and lively colours, further enhancing the ambience. This is supported not least by unobtrusive high-quality corridor lighting: on each floor, Linaria individual batten luminaires were installed to systematically create highlights. They provide spatial orientation and ensure pleasant lighting conditions. As a prerequisite of energy-efficient operation, all luminaires are dimmable and fitted with presence detectors.

And the winner is...

And the winner is...