YXLON advances into the world of bicycles and has its first 'live' appearance at a trade fair for bikes: Eurobike 2012 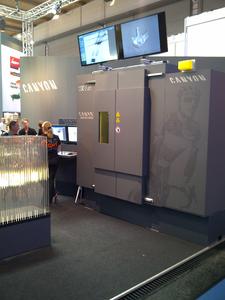 (PresseBox) ( Hamburg, 12-09-10 )
The bicycle industry has joined the ranks of producers that concern themselves more and more intensively with quality and safety. As a trailblazer among bicycle manufacturers, Canyon has invested in a Y.Multiplex CT and uses the system to inspect parts bearing a relevance to safety, for instance bicycle forks, via X-ray technology. At Eurobike 2012, the world's largest trade fair for bicycles that ran from August 29th to September 1st in Friedrichshafen, Germany, Canyon presented Y.Multiplex CT to its viewing public and demonstrated several of its applications 'live'. The YXLON X-ray inspection system with integrated computed tomography impressed the audience not only due to the options it offers and simple operation; its look was acclaimed, too. Canyon had taken great pains to have the system adapted to its corporate design, providing a real eye-catcher at the trade fair.

Y.Multiplex CT is being deployed in 3 areas at Canyon:

As one example, wall thicknesses, lamination, gluing points and materials are inspected for the presence of inclusions, cracks or other irregularities during development. Highly dynamic radiography (HDR) is primarily used thereby, and at critical spots a switch to CT (computed tomography) is made simply by pressing a button. This enables even the tiniest details to be defined in a 2D or 3D depiction.

During quality assurance, bicycle series are inspected in order to guarantee the greatest possible safety for the customer. When all standard inspections have been passed, Canyon has no problem giving customers a 6-year guarantee for the bicycle frame. At Canyon, carbon fiber forks on racing bikes are subjected 100 % to radiographic inspection. In the event of abnormalities, they are analyzed further using CT before they are passed on in the course of production.

Canyon also offers its clientele damage analysis as a service. Customers can have parts that may have been damaged in a crash or collision tomographed and appraised directly at Canyon.

In summary, with YXLON new standards are now being set in the bicycle industry, too.

YXLON International GmbH, the leading supplier of industrial X-ray inspection systems and computed tomography solutions for the non-destructive testing of materials (NDT), is an innovative high-tech company with a wealth of tradition. YXLON has belonged to the COMET Holding AG (Switzerland) corporate group since June 2007. The COMET FeinFocus division was integrated into the corporate structure at YXLON as a product line in the course of this transition. As a result, YXLON is now able to cover the strong demand for X-ray and CT systems in the microfocus sector as well, for instance, the way they are used in the electronics industry.

With its headquarters in Hamburg (Germany), its subsidiaries and a globally aligned network of representatives worldwide, YXLON provides solutions for any type of production process, yet the same applies for servicing and maintenance work, whether in shipbuilding, pipe and vessel construction, the automotive, aviation and aerospace industries, or for microfocus inspection in the electronics industry.

The selection offered by YXLON encompasses both microfocus and conventional X-ray and CT technologies. The portfolio ranges from portable systems designed for application in the field to standardized modular solutions, complex, fully automatic systems and systems specific to the customer, all the way to FeinFocus microfocus X-ray and µCT systems.

Recommend YXLON advances into the world of bicycles and has its first 'live' appearance at a trade fair for bikes: Eurobike 2012 press release