YXLON: Inauguration of the YXLON MU2000-D X-ray and CT System at Renault Sport Formula One™ Team Technical Centre in UK 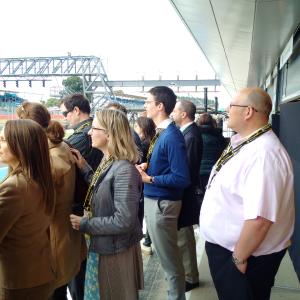 (PresseBox) ( Enstone/Hamburg, 16-07-26 )
YXLON International, worldwide leading producer of X-ray and CT systems for industrial applications and Renault Sport Formula One™ Team announce the successful start of their technical partnership. YXLON has provided its proven Y.MU2000-D X-ray system as a premium version which includes the Variofocus X-ray tube, High-Dynamic Radioscopy (HDR) as well as computed tomography (CT). Renault Sport Formula One™ Team can now conduct most of their inspection tasks for quality assurance and R&D with this universal X-ray inspection system, thus optimizing their testing processes.

To celebrate the official start of the Partnership, a selected group of NDT users were invited by the UK YXLON Agents, Aegleteq Ltd, to visit Renault Sport Formula OneTM Team’s Enstone Technical Centre, Oxfordshire for a tour of facilities.  At the same time the newly installed MU2000-D 225 DR Inspection System with CT, was showcased.  Guests were also taken to have a behind the scenes insight into one of the rare F1 ‘on track’ test sessions with Renault Sport Formula One™ Team in the pits at the Silverstone Racetrack. All guests enthusiastically agreed about how interesting the whole day was,with special thanks to Luca Mazzocco and Adrian Talbot from Renault Sport Formula One Team for hosting the event.

Some quotes from the event: “It was a fabulous day”, Stuart Price from NDT Maincal put it in one sentence. And Tom Wilson from Dyson Diecastings in Milton Keynes added: “It was a fantastic day. Very informative about X-ray and CT and the NDT challenges of Renault Sport Formula OneTM Team and its manufacturing processes. It was really interesting to see the X-ray system. Visiting Renault Sport Formula OneTM Team during its test session programme in the afternoon was a highlight.” Dr Nick Brierley, Senior Research Engineer at Manufacturing Technology Centre in Coventry said. “It was a great introduction into how Formula 1 works. We learned a lot about the manufacturing challenges Renault Sport Formula OneTM Team is facing.”  Neil Smith from Grainger & Worrall Ltd, Motorsport Division stated that “As a User of YXLON CT Systems for engine parts, it was very interesting to understand the challenges of manufacturing a complete race car.”

Based on the technical partnership, the X-ray inspection room at Renault Sport Formula One™ Team Technical Centre is available for visitors who would like to learn more about the benefits of 2D and 3D X-ray inspection in the automotive field.

The Y.MU2000-D expands the equipment of Renault Sport Formula One™ NDT (non-destructive testing) department, which is often active 24/7. The Team is expecting tremendous benefits by using the system and they will now take full advantage of its capabilities in quality assurance and R/D answering the high inspection demands in the preparation phase and during the racing season.

Adrian Talbot, technical supervisor of the NDT department, explains the objectives Renault Sport Formula One TeamTM aims to achieve with their new X-ray system: “By adopting digital radioscopy, our general NDT inspection process has become quicker and consequently we are able to turn cars around much faster between races. Most significantly, the Y.MU2000-D has improved the inspection process of our composite assemblies, which are inherently difficult to inspect using our current NDT methods. We now have the ability to document detailed images of assembly items preceding and post-race for further analysis and future development. With the use of 75 seconds-quick computed tomography, we will be able to give up cost-intensive disassembling of high-quality parts in the future.”

Nick Chester, Technical Director: “We will be able to significantly increase the quality of single components both during development and production. Structural analyses of various materials, including fiber composites or 3D printed components, damage analyses and nominal/actual comparisons to CAD data, can be realized much faster and more precisely than with other technologies. This will have positive repercussions on the overall quality and safety of our racing cars but also help reduce costs and facilitate a faster deployment of technology innovation.”

The Y.MU2000-D has been proving its reliability and flexibility in multiple applications all over the world, including a large range of samples and materials in the automotive, aerospace and other industries. Whether the system is used to spot check or serial inspection, the Y.MU2000-D is the complete, wide-range solution for inspection tasks; and has been used dependably in research & development, in institutes and labs, and in production, even in rough environments.

The Variofocus X-ray tube, which is used in the system supplied to Renault Sport Formula One TeamTM extends the bandwidth of inspection parts thanks to the scalable focal spot ranging from 250 µm at 290 W up to 800 µm at 1600 W, with optimum detail detectability. The Variofocus X-ray tube is especially proven in the Aerospace industry thanks to its flexibility and power to penetrate thick materials like aluminum or Inconel®. The CT function enables the operator to easily and quickly change from digital radioscopy (DR) to 2D and 3D computed tomography in order to obtain more detailed information about material, defects and inner structures.

About Renault Sport Formula One™ Team

Renault has an enduring love story with Formula 1. In 1906 Renault won the first-ever Grand Prix with Ferenç Szisz.

Renault made its modern F1 debut in the 1977 British GP with the V6 turbocharged RS01. Jabouille scored the first points in the 1978 US GP, and then the first win later that year in Dijon.

Renault missed the 1983 Drivers’ title by just two points, despite Prost taking four wins to Piquet’s three. The same year Renault became an engine supplier, joining forces with Lotus, and later Ligier and Tyrrell. The works outfit closed at the end of 1985 with focus instead directed at engine supply.

Renault returned to F1 in the late eighties as an engine partner to Williams. By 1991 the combination was unstoppable, and in 1992 Mansell secured Renault’s first World Championship. Prost also won in 1993, followed by Hill in 1996 and Villeneuve in 1997. In 1995 Renault joined forces with Benetton, ensuring that between 1992 and 1997 Renault engines won 74% of Grands Prix and six straight titles.

In 2001 Renault returned as Benetton’s engine supplier, and in 2002 the team was reborn as Renault F1 Team. In 2005 Alonso won the Drivers’ title and Renault the Constructors’ with eight wins between Alonso and Fisichella. Despite the change from V10 to V8 technology for 2006, Renault again secured both titles.

In 2007 a partnership was formed with Red Bull Racing, and in 2010 Vettel became the youngest champion in history, while Red Bull won the Constructors’ title. As Renault again refocused its activities around engine supply, Vettel secured consecutive titles in 2011, 2012 and 2013.

In 2014, Formula 1 welcomed radical avant-garde powertrain technology. The era proved hard fought and a rethink of corporate strategy was required.

At the end of 2015 Renault announced it would return to team ownership. From 2016, the Renault name once again races in F1, this time as Renault Sport Formula One Team.

YXLON International designs and produces radioscopic and CT inspection systems for the widest variety of applications and fields. Whether situated in the aviation & aerospace, automotive or electronics industry, our customers are among the largest producers, major enterprises that place their confidence in our quality worldwide.

The name YXLON stands for assurance and quality for all types of cast parts, tires, electrical and electronic components, turbine blades, welded joints and a lot more. Our product portfolio includes X-ray systems for installation in radiological inspection envelopes, universal X-ray inspection systems on the basis of fully shielded devices, as well as solutions specific to a customer. Whether in manual, semi or fully automated operation, our inspection systems are ideal for deployment in research & development and can be integrated into any production process.

CT systems have been an integral part of our product portfolio since as far back as 2003. Computed tomography provides a three-dimensional insight into inspection items, thus enabling the analysis of inner structures, dimensional measurement tasks in metrology applications or actual-to-nominal comparisons to CAD data, to name only a few examples. Besides delivering a more precise inspection evaluation when compared with radiography, computed tomography also provides valuable information about the production process. Above and beyond such advantages, our microfocus systems permit highly detailed looks into the most intricate structures and tiniest components.

With our headquarters in Hamburg, sales and service locations in Tokyo, Osaka, Hudson (Ohio), San Jose (California), Beijing, Shanghai, Hattingen and Heilbronn, as well as a network of representatives in over 50 countries, as YXLON we're local for our customers all over the world.