New at the CONTROL 2014 trade fair 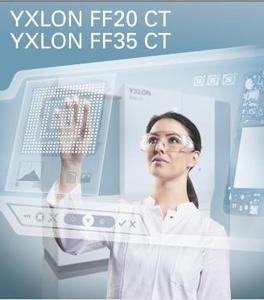 (PresseBox) ( Hamburg, 14-05-02 )
YXLON is breaking new ground in operational friendliness with the new YXLON FF20 CT and FF35 CT systems for the non-destructive testing of materials and their measurement. Conventional computed tomography scanners on the market are complex systems involving sophisticated operation - even for experienced users. In contrast, the new YXLON Geminy software platform supports the user intuitively and 'paves' a simpler way to achieving the best data quality in three-dimensional inspection - even for new CT users - via the platform's system intelligence.

An eye-catching feature of the new CT systems is the new 'smart-touch' operating concept with two monitors. One of them is arranged in a horizontal format, as usual, the other in a vertical format. This not only increases work ergonomics: it keenly simplifies operational workflows as well. While one monitor is used for control and input, current results can be displayed on an ongoing basis on the other. Touch-screen operation has already achieved an everyday status in private-sector applications.

The YXLON FF35 CT combines precision with versatility. With the large inspection envelope and two different X-ray tube sources, a close critical look can be taken, even at larger objects, or to scan the details of an inspection series of smaller items with a high degree of accuracy. While doing so, the directional tube head is enhanced via the optional, new transmission tube head FXE190.61.

YXLON FF20 CT, the 'little brother', equally fulfills the highest demands posed on CT system precision. It is predestined for working with the highly exact computed tomography data for smaller objects, for instance the way they are typically found in electronics and communications technology.

Operation via YXLON Geminy differs greatly from the kind experienced in conventional computed tomography systems. This system is controlled via icons and manages almost completely without text. The intuitive operation helps to acclimatize staff quickly during initial training so that operators are able to work with the equipment productively within a short period of time. The system settings are regulated incrementally via user profiles. The individual inspection steps along with the elements of the imaging chain respectively contained within them are composed per 'smart touch' from graphic symbols in the form of a block diagram.

Unlike the situation found in conventional CT systems, the communication between YXLON FF35 CT or YXLON FF20 CT users doesn't end when they literally leave the system. The operator can obtain information according to his or her needs via remote access, for example by means of a tablet, or be kept up to date automatically via push messages. This way an inspection operator can pursue other work activities while the system implements a measurement, yet is still notified on a timely basis when a work process is concluded. In a different vein, a quality manager can receive information about the system status at all times, for example whether results from system tests are available and if they comply with the specifications - without the manager having to perform the actual work in the CT system.

In his capacity as President YXLON, Mr. Stefan Moll is pleased to be presenting the newest YXLON CT systems at the CONTROL 2014 trade fair: "Our customers are driven by requirements and specifications that are becoming more and more complex. They strive towards an ever-greater perfection in production. Our intuitively operable CT systems with their precise 3D data provide real added value in this race."