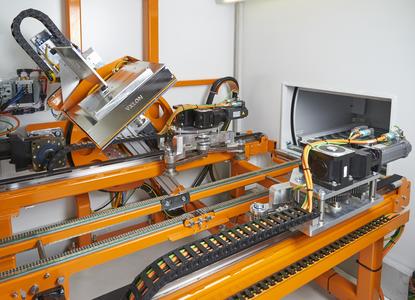 (PresseBox) ( Hamburg, 16-03-29 )
Following intensive test operation during production involving more than 250,000 inspected wheels, YXLON has officially launched the new WI26 G wheel inspection system with ADR and the new YXLON Panel 460 detector on the market in the course of its Wheel Symposium 2016. The design for the new WI26 G has been geared for speed, inspection decision-making at its best, and minimum maintenance requirements. “With this wheel inspection system we are able to double our production throughput,” is the enthusiastic commentary from Chris Puhlmann at Borbet Solingen about the concept’s success. At less than 20 seconds of inspection time per standard wheel, an annual throughput of 1.5 million inspected wheels is being applied as the basis. Which makes the WI26 G the fastest X-ray system in its class.

WI26 G is equipped with the new YXLON Panel 460, a detector that supplies what is currently the best image quality for reliable inspection decisions. What’s more, due to the extremely large active area the number of projections per inspection run is reduced, equivalent to a savings in real time. The innovative manipulation concept using grippers increases the speed of inspection even further. The efficient wheel feed and discharge via a new type of loadlock and transfer construction design ensures complete shielding against radiation and implements wheel identification directly during insertion. At the same time, the ingenious mechanics minimize unnecessary wear & tear, while automatic calibration programs dispense with frequent program adjustments. Aligned to work with a wide range of wheel sizes and weights, the WI26 G is excellently suited for mixed operation and remains operable even in the event of an expanded product portfolio.

The prototype for the WI26 G had already been presented to customers a year ago at the YXLON Wheel Symposium 2015 in order to integrate ideas and suggestions from the circle of application users directly into advanced development. Even then the feedback was consistently positive: the new concept met with wide-scale approval. The prototype was subsequently able to prove itself during an intensive test run in ongoing production. Its successor has meanwhile benefited from an inflow of further optimizations. As a result of the great interest shown, this year’s customer event had to be upscaled to include five dates where the most well-known wheel producers had the opportunity to become acquainted with the system in detail and engage in a vigorous exchange of opinions regarding the different topics revolving around wheel inspection. Visitors who were now able to appraise the further developments performed on the WI26 G as well as interested parties who had not been familiar with the system before eagerly expressed their enthusiasm at the wheel symposium.

YXLON International designs and produces radioscopic and CT inspection systems for the widest variety of applications and fields. Whether situated in the aviation & aerospace, automotive or electronics industry, our customers are among the largest producers, major enterprises that place their confidence in our quality worldwide.

The name YXLON stands for assurance and quality for all types of cast parts, tires, electrical and electronic components, turbine blades, welded joints and a lot more. Our product portfolio includes X-ray systems for installation in radiological inspection envelopes, universal X-ray inspection systems on the basis of fully shielded devices, as well as solutions specific to a customer. Whether in manual, semi or fully automated operation, our inspection systems are ideal for deployment in research & development and can be integrated into any production process.

CT systems have been an integral part of our product portfolio since as far back as 2003. Computed tomography provides a three-dimensional insight into inspection items, thus enabling the analysis of inner structures, dimensional measurement tasks in metrology applications or actual-to-nominal comparisons to CAD data, to name only a few examples. Besides delivering a more precise inspection evaluation when compared with radiography, computed tomography also provides valuable information about the production process. Above and beyond such advantages, our microfocus systems permit highly detailed looks into the most intricate structures and tiniest components.

With our headquarters in Hamburg, sales and service locations in Tokyo, Osaka, Hudson (Ohio), San Jose (California), Beijing, Shanghai, Hattingen and Heilbronn, as well as a network of representatives in over 50 countries, as YXLON we're local for our customers all over the world.