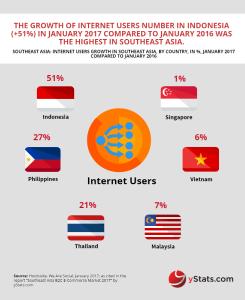 (PresseBox) ( Hamburg, 17-05-19 )
“Southeast Asia B2C E-Commerce Market 2017” is a market report recently published by yStats.com, a secondary E-Commerce market intelligence provider from Hamburg, Germany. The report reveals the lucrative potential of E-Commerce in the 6 major markets within Southeast Asia, including trends and forecasts.

With estimated growth rates in the double digits, Southeast Asia is leaving its mark on the worldwide E-Commerce scene. E-Commerce accounts for a very low percentage of total retail sales in this region, however, increases to broadband and mobile connectivity in combination with a consumer openness to online retail leave market potential high. Third party sources cited in the yStats.com report confirm that the region’s online retail is expected to include a strong double-digit figure in USD billions by 2025. This trend is also catching hold amongst national governments, who have also implemented various programs to boost their local E-Commerce.

Indonesia has the biggest and quickest growing online retail market in Southeast Asia, relays yStats.com research. Thailand’s E-Commerce market ranks second and also has the highest rate of M-Commerce penetration. Nearly half of online spending in Thailand came from M-Commerce in 2016. Regarding Singapore, it contains the region’s most advanced E-Commerce market, the largest B2C E-Commerce share of total retail sales, and the highest Internet penetration and speed. Malaysia also has a robust Internet user penetration, however, only about one in three of them made purchases online. Vietnam and the Philippines contain relatively nascent, but rapidly developing online retail markets.

Data from the yStats.com report ranks Lazada as a major E-Commerce player in Southeast Asia due to it being the most visited online retail website in most of the countries. Other top players include Vietnam’s Mobile World, Malaysia’s 11Street, and Singapore’s Giosis. Furthermore, despite the lack of local operations, Amazon is majorly influencing this region’s emerging markets.