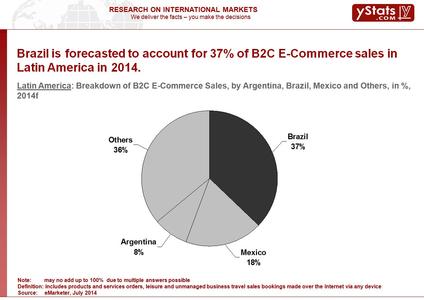 (PresseBox) ( Hamburg, 15-01-07 )
Hamburg-based market research organization yStats.com has released another report in the series about emerging B2C E-Commerce markets worldwide. "Brazil B2C E-Commerce Market 2014" reports on the potential of the largest online retail market in Latin America. According to yStats.com's own forecast, B2C E-Commerce sales of goods in Brazil will top EUR 20 billion by 2018. Among the important characteristics of this booming online retail market is the high share of the clothing segment, the influence of social media and the importance shoppers give to a free delivery option.

Brazil is eleventh largest B2C E-Commerce market worldwide and one of the fastest growing. In Latin America, Brazil is an unquestioned leader in terms of online market size, though it ranks behind Argentina and Mexico by forecasted growth pace. Brazil stands out among other major online retail markets worldwide in terms of popularity of department stores in online shopping, a high share of clothing segment and high penetration of luxury buyers who shop high-end items exclusively from the Internet.

Driven by increasing online shopper penetration and spending, online retail sales in this country, excluding travel, are forecasted to top EUR 20 billion in the next four years. The share of M-Commerce sales on total online retail in Brazil continues to grow, boosted by surging mobile Internet penetration. Large online retailers report a revenue share of close to 20% generated through mobile devices in 2014.

Around a third of Internet users in Brazil shopped online last year. An important characteristic of online buyers in the country is the influence of social media, especially among young adults. Furthermore, online shoppers in Brazil are used to free delivery and an installment payment option, which creates significant challenges for online merchants who wish to stay competitive but also profitable.

The competition on the online retail market in Brazil intensified in 2014, as two major players raised additional capital. Nova Pontocom, a company operating several online retail sites in Brazil, was reorganized together with France-based Cdiscount into Cnova NV which raised almost USD 190 million through initial public offering, while a major online retailer of sporting goods, Netshoes, received USD 170 million from several investors. The market leader among online retailers, however, remains B2W Digital with its brands Americanas, Submarino and Shoptime. Furthermore, Latin America's E-Commerce giant, MercadoLibre, which operates online marketplaces, generates half of its large revenues in Brazil, and is thus another important player on the booming Brazilian E-Commerce market.

Headquartered in Hamburg, Germany, the firm has a strong international focus and is specialized in secondary market research. In addition to offering reports on markets and competitors, yStats.com also carries out client-specific research. Clients include leading global enterprises from various industries including B2C E-Commerce, electronic payment systems, mail order and direct marketing, logistics, as well as banking and consulting.

Im internationalen Vergleich, hat Avast in einer Studie herausgefunden, sind deutsche Eltern am unzufriedensten mit dem digitalen Lernen ihrer Kinder. Gefordert ist ein schlüssiges Medienkonzept, das deutlich mehr Sicherheit für die Schüler bietet. read more
The publisher indicated in each case is solely responsible for the press releases above, the event or job offer displayed, and the image and sound material used (see company info when clicking on image/message title or company info right column). As a rule, the publisher is also the author of the press releases and the attached image, sound and information material.
The use of information published here for personal information and editorial processing is generally free of charge. Please clarify any copyright issues with the stated publisher before further use. In the event of publication, please send a specimen copy to service@pressebox.de.