yStats.com: Asia-Pacific is one of the global leaders in mobile payments 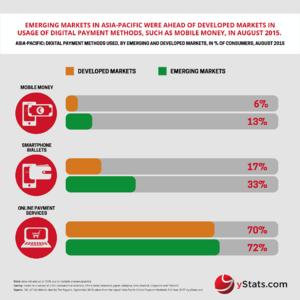 (PresseBox) ( Hamburg, 16-03-11 )
A new report, titled “Asia-Pacific Online Payment Methods: Full Year 2015”, has been released by Germany-based secondary market research specialist yStats.com. The publication sheds light on the payment preferences of online shoppers in this region and reveals major trends and market developments. One of the report findings is that Asia-Pacific ranks among the global leaders in mobile payment usage.

Overall, emerging markets in Asia-Pacific are ahead of advanced markets when it comes to the adoption of innovative payment methods, according to the research findings of yStats.com. For example, the share of individuals using mobile wallets in emerging markets was almost double that share in the advanced markets in mid-2015. In the previous year, China was the highest-ranking country worldwide in share of mobile phone users making mobile payments both for digital and non-digital goods, while India had the highest share of online shoppers who would be willing to use digital currency.

Asia-Pacific is one of the leading regions worldwide in mobile payment use. Mobile payment transactions in some of the countries in this region have been growing at triple-digit rates, as shown in yStats.com’s report. Asia-Pacific is also one of the trend setters in this space. Across the region, a number of mobile messengers launched payment services, such as LINE Pay from Japan and Kakao Pay from South Korea. As online and mobile payments continue to grow, competition remains intense.

Die Industrie will zurück zur Normalität – einige Unternehmen spielen deshalb mit dem Gedanken, Mitarbeiter selbst zu impfen, zu testen und Impf-Boni zu vergeben. Aber ist das zulässig? Wir klären die rechtlichen Fragen. read more
The publisher indicated in each case is solely responsible for the press releases above, the event or job offer displayed, and the image and sound material used (see company info when clicking on image/message title or company info right column). As a rule, the publisher is also the author of the press releases and the attached image, sound and information material.
The use of information published here for personal information and editorial processing is generally free of charge. Please clarify any copyright issues with the stated publisher before further use. In the event of publication, please send a specimen copy to service@pressebox.de.

Recommend yStats.com: Asia-Pacific is one of the global leaders in mobile payments press release