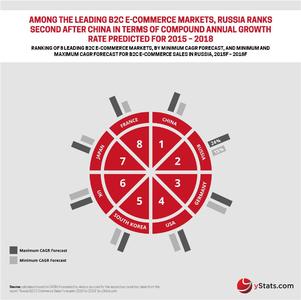 Russia has moved to the front of the pack in Europe as the leader in number of Internet users, though Internet penetration has reached just below two thirds of the population. Of users, over a third recorded purchases online - a statistic that leaves plenty of room for potential growth. Among many trends pertinent to this potential growth is cross-border B2C E-Commerce, which increased to approximately one third of B2C E-Commerce sales in Russia in 2014. Peculiarities in Russian B2C E-Commerce include an increase in credit card usage and a declining, yet still very popular, usage of cash on delivery.

Though major domestic metropolises maintain the lead in sheer number of online orders, non-central areas of Russia may hold the key to major, untapped growth potential. For example, Siberia alone more than doubled its B2C E-Commerce sales in 2014. Compared to some other top B2C E-Commerce markets worldwide, Russia is projected to lag in terms of share of B2C E-Commerce in total retail, but boasts projected annual growth rates nearly twice that of some of the same international competitors. Of note is also the projection of Russia's share of global B2C E-Commerce sales, forecasted to fall by a small fraction over the next few years.

Despite overall negative economic prospects, Russia stands to observe positive double digit increase in sales in B2C E-Commerce over the next few years. With the potential for more consumers across Russia to buy online, domestic online retail leaders like Ozon.ru, Ulmart.ru, Mvideo.ru and Wilberries.ru, and foreign E-Commerce companies such as Aliexpress and JD.com, among many others stand to observe persistent B2C E-Commerce sales growth, regardless of Russia's overall current economic turmoil.