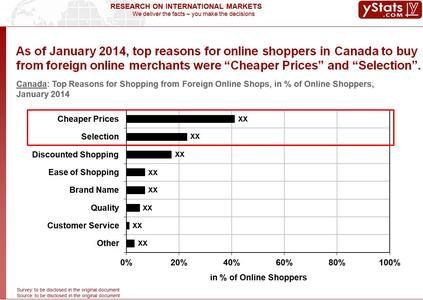 (PresseBox) ( Hamburg, 14-04-16 )
Hamburg-based secondary research organization yStats.com reports in its new publication "Global Cross-Border B2C E-Commerce 2014": that the interconnectedness of the world through the Internet is providing opportunities for online merchants, payment processors, and delivery companies to grow apace with the growth of cross border online shopping.

The worldwide leaders in B2C E-Commerce exports are the USA, the UK, Germany, the Nordic nations, the Netherlands and France. Together their online retail cross-border exports are forecasted to top EUR 100 billion by 2020. Within these top countries, the most intensive cross-border B2C E-Commerce trade flow is between the USA and the UK. The top six countries in online retail imports are the USA, the UK, Germany, Brazil, China and Australia. The largest importer of them all was China in 2013, followed by the USA. Put together, online shoppers from these markets are expected be purchasing several hundred billion EUR annually within a few years.

The leading cross-border E-Commerce companies have varying strategies to reach consumers worldwide. Amazon and eBay offer shipment to most countries with some restriction on items available for global delivery. Net-a-Porter, iHerb and Zooplus sell worldwide from central locations, while Asos and Book Depository offer free worldwide shipments on their products. Others, such as Zalando and Glossybox sell only to markets where they have local operations. While strategies vary, across all Internet vendors, the leading product categories in B2C E-Commerce are fashion, health and beauty products, and personal electronics.

Though the exact value estimates differ, the USA is undoubtedly one of the largest markets worldwide for cross-border B2C E-Commerce, both in terms of exports and imports. The countries most purchased from by online shoppers in the USA are the UK and China. Online exports especially hit a peak each Cyber Weekend. In neighboring Canada, a third of online shoppers purchase from US websites and some also purchase from Asian websites, motivated by cheaper prices and wider product selection.

In the fast growing Latin American B2C E-Commerce market, cross-border online shopping plays a significant role. In countries where domestic B2C E-Commerce is underdeveloped such as Colombia, Paraguay and Venezuela the majority of online purchases are cross-border. In Brazil, the number of cross-border online shoppers is forecasted to reach almost ten millions by 2018, with expenditure growing annually by almost a half. The number of online shoppers in Argentina purchasing from foreign websites doubled in 2013, however, the country's authorities placed regulatory restrictions on cross-border trade in January 2014.

Cross-border B2C E-Commerce thrives in Europe, supported by initiatives of the lawmakers in creating a single online retail infrastructure and regulation. More than a quarter of online shoppers in the EU have made purchases from other EU countries, with this share being higher in the Euro area. The UK was the most popular destination for cross-border online shopping among European online shoppers purchasing abroad in 2013, followed by Germany and France.

Germany is the one of the most active countries worldwide both in import and export B2C E-Commerce. Of the selected European countries, cross-border B2C E-Commerce from Germany was the most popular in the Nordics and in France. On the other hand, the top destinations for cross-border online shoppers in Germany were the UK, the USA and China in 2013. In neighboring Austria, over 70% of total online shoppers purchased outside their country in 2013, a percentage significantly higher than the EU average.

The UK is among the biggest cross-border B2C E-Commerce exporters worldwide, supported by the popularity of British brands around the world and wide use of the English language. On the side of imports, only a small double-digit share of online shoppers in the UK buy from online retailers in other European countries, while the USA, China and Hong Kong are more popular destinations. In other Western European nations, cross-border online shopping from the UK, Germany and the USA is popular in France, while also a quarter of online stores in France shipped internationally, supported by international demand for French fashion and beauty brands. In Italy, tourism, fashion and food were the leading categories of B2C exports, while imports were dominated by discount flight purchases.

In Eastern Europe, cross-border online shopping is a growing trend in Russia. The cross-border B2C E-Commerce sales of goods to Russia were estimated to more than double in 2013, while traffic to top international ecommerce websites by Russian users almost quadrupled. Over 10% of online shoppers in Poland purchased from foreign online shops. The value of international E-Commerce transactions made in Turkey reached over EUR 1 billion in 2013, growing by a third year-on-year.