Online gaming increasing on mobile devices and social networks in emerging markets of Europe, Africa and the Middle East 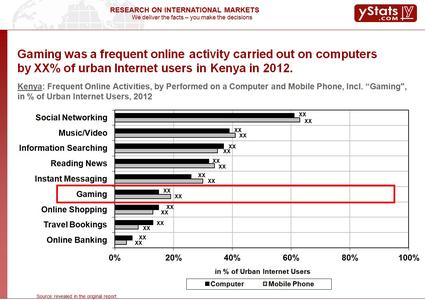 (PresseBox) ( Hamburg, 14-03-05 )
A new publication by Hamburg-based secondary research organization yStats.com, "EMEA Online Gaming Market 2014", reports a trend of gamers away from consoles and pre-installed PC games toward online and mobile games. This move to mobile and social is especially pronounced in emerging markets such as Eastern Europe, the Middle East and Africa compared to Western Europe, where a high percentage of gamers still play on their console or PC, but even there the trend is apparent as smartphone and tablet penetration continues.

In Europe, the UK led spending rates on digital game content, while Germany was the leading country by average monthly revenue per paying user. Online gaming is a vast market in the UK as nearly 20% of the population of the UK use the Internet to play video games. The online game market there has further growth potential because of the mobile trend. Tablets were the first choice of over a third of mobile device owners to play games in 2013 in the UK, while half of all tablet owners played games. In Germany, consoles and PC are still popular for gaming, but mobile and social platforms are gaining importance. Downloads generated the highest revenue on the online gaming market in Germany in 2013. Mobile game sales also grow. The most popular types of games played in Germany are strategy, casual and action games.

In France, digital games are expected to grow and take a large share of the total video games market, while physical games sales decline. The revenues of the digital gaming market in France grew by over 10% in 2013, while the share of digital gaming on the total gaming market increased. Computer was the device most frequently used for gaming in France last year, followed by smartphone. In Belgium, the largest group of gamers played social or casual games, with the mobile gaming audience also being significant. A similar pattern was observed in Spain, and in Italy the PC and consoles are still used more for games than smartphones and tablets.

The emerging markets Turkey and Poland were ahead of Western European countries in terms of the share of online gamers on Internet users in 2013. Eastern European countries also had a higher share of users who play networked games than in Western Europe, with Croatia in the lead. In Poland, computer games remained a major segment of the gaming market in 2013, but social, mobile games and online MMOs are catching up. In Turkey, over 20 million people play games online regularly, with social games being the largest contributors to this number.

In Russia, the online gaming market is booming, with still more growth expected from the mobile and social platforms. The online gaming market grew by over 20% in Russia, with MMO being the largest segment, followed by social. The number of mobile gamers in Russia is forecasted to increase annually to reach over 60 million in 2016, with around the same number playing online games other than on mobile devices.

Online gaming revenues in South Africa are forecasted to grow by a small-double digit percentage between 2013 and 2017. Mobile gaming outperforms pure online gaming by far in South Africa, with the revenues differing by several times. In other African countries, such as Ghana, Nigeria, Kenya and Senegal, online and mobile gaming is also gaining popularity, with a small double-digit share of Internet users engaging in this activity on their mobile devices and PCs.

In Unternehmen ist es mittlerweile zum Alltag geworden, dass Mitarbeiter mit Instant Messengern auch über Smartphones kommunizieren. Dabei setzen viele Anwender auf WhatsApp. Im professionellen Umfeld ist das aus Datenschutzgründen aber sehr bedenklich. Wir gehen auf Alternativen ein. read more
The publisher indicated in each case is solely responsible for the press releases above, the event or job offer displayed, and the image and sound material used (see company info when clicking on image/message title or company info right column). As a rule, the publisher is also the author of the press releases and the attached image, sound and information material.
The use of information published here for personal information and editorial processing is generally free of charge. Please clarify any copyright issues with the stated publisher before further use. In the event of publication, please send a specimen copy to service@pressebox.de.