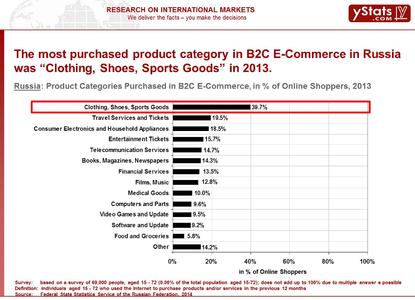 (PresseBox) ( Hamburg, 15-01-14 )
Hamburg-based secondary market research organization yStats.com has published a new report about B2C E-Commerce market in the four top emerging countries, Brazil, Russia, India and China. The "BRIC B2C E-Commerce Markets" report reveals that the four markets have been a focus of online retail growth and an attractive target for investors in B2C E-Commerce.

China is the largest of the BRIC countries in terms of market size and is ranked as the world's top market in B2C E-Commerce potential. The most populous country worldwide, China's potential for further growth of online retail comes from the growing Internet and online shopper penetration, as well as increasing consumption per shopper. The distinguishing characteristics of Chinese shoppers include mobile affiliation, popularity of price comparison websites and the use of social networks and product reviews. The B2C E-Commerce market in China is dominated by online marketplaces, while the direct-to-consumer segment is significantly smaller. Alibaba's B2C marketplace Tmall was the largest player in 2013, controlling almost half of the market, followed by JD.com and Tencent. Chinese shoppers are also actively buying outside the country, with their purchases accounting for the largest part of the country's multi-billion EUR cross-border B2C E-Commerce value. yStats.com forecasts that B2C E-Commerce in China will maintain double-digit growth rates for the next several years.

Russia ranks second of the BRIC countries by the size of the online retail market and leads the four markets in terms of spending per shopper and Internet penetration. In 2013, it was the fourth largest B2C E-Commerce market in Europe and the largest in Eastern Europe. yStats.com forecasts that B2C E-Commerce sales will near EUR 30 billion in 2018. The practice of shopping through a mobile device is increasing rapidly, as mobile Internet penetration increases. Cross-border shopping is also a trend, as around 10% of online shoppers buy directly from merchants in Europe and the rest of the world. The E-Commerce sector in Russia has been a major target for investment. In 2011-2013 the main beneficiaries of large investment sums were fashion online stores, such as Lamoda, KupiVIP and Sapato, while in 2014, online retailers of goods for children have been targeted, as this segment has untapped growth potential. The top five online shops in terms of revenues last year in Russia were electronics merchants Ulmart and Citilink, fashion retailer Wildberries, mass merchant Ozon and coupons dealer and retailer Biglion.

Brazil is the eleventh largest B2C E-Commerce market worldwide and the unquestioned leader in its region. Among the important characteristics of this booming online retail market are the high share of the clothing segment, the influence of social media in purchase consideration and the importance shoppers give to a free delivery option. Driven by increasing online shopper penetration and spending, online retail sales in this country, excluding travel, are forecasted to top EUR 20 billion in the next four years. The share of M-Commerce sales on total online retail in Brazil continues to grow, boosted by surging mobile Internet penetration. The competition in the online retail market in Brazil intensified in 2014, as Nova Pontocom, a company operating several online retail sites in Brazil, was reorganized together with France-based Cdiscount into Cnova NV, while a major online retailer of sporting goods, Netshoes, raised additional investment. The market leader among online retailers remains B2W Digital. Furthermore, Latin America's E-Commerce giant, MercadoLibre generates half of its large revenues on marketplace in Brazil.

In India, the smallest B2C E-Commerce market of the BRIC countries in terms of sales, the large population and growing Internet connectivity contribute to optimism for online retail take-off. M-Commerce prospects are particularly bright, due to mobile being the most popular type of Internet connection. Because of this increase in Internet penetration B2C E-Commerce sales in India have shown double-digit growth rates in recent years, placing the country fourth world-wide in sales growth. Continued growth at above 50% average annual rate is forecasted for the next several years. Competition between the two largest online marketplaces in India, Snapdeal and Flipkart, was joined in 2013 by the marketplace launched by Amazon India. Popular online fashion store Myntra was acquired by Flipkart in 2014, while online and home shopping company Homeshop18 filed for an IPO.

Headquartered in Hamburg, Germany, the firm has a strong international focus and is specialized in secondary market research. In addition to offering reports on markets and competitors, yStats.com also carries out client-specific research. Clients include leading global enterprises from various industries including B2C E-Commerce, electronic payment systems, mail order and direct marketing, logistics, as well as banking and consulting.