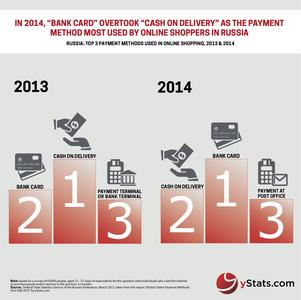 (PresseBox) ( Hamburg, 15-08-06 )
A new update about the booming global online payments environment from the Germany-based secondary market research company yStats.com highlights a wide variety of preferences of payment preferences of online shoppers. The report "Global Online Payment Methods: First Half 2015" also sheds a light on the competition in this growing industry, which remains fierce.

Around the world, the online and mobile payments environments remain dynamic. The number of online payment users is growing rapidly in emerging markets, having reached over 300 million in China alone by the end of last year. The volume of online payments made through third-party providers grew by almost one half in 2014. Mobile payments are developing even more rapidly: in Nigeria, for example, mobile payment transactions grew more than ten-fold. Another observed shift happening is the diminishing share of cash on delivery in some emerging markets, as credit cards and alternative online payment methods rise. For example, in Russia, 2014 was the first year that bank card overtook cash on delivery as the payment method most used by online shoppers. Also, notable regulatory shifts are taking place. For example, in Japan authorities have been considering a change in rules to enable banks to compete better in the online payments market.

Competition among payment providers is also dynamic and fierce, with each of the major players trying not to lag behind the others in their online and mobile payment offering and innovation. Express checkout is a growing trend in the industry: American Express, Amazon, Visa and PayPal have all recently launched or updated their speedy and seamless checkout offerings. The battle of mobile wallets also continued in the first half of 2015, with Apple Pay expanding from the USA to the UK, Samsung launching Samsung Pay in South Korea and Google unveiling Android Pay.