New report by yStats.com: B2C E-Commerce Market in Poland is the Third Largest in Eastern Europe 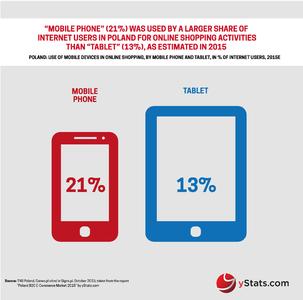 The sixth largest country in the EU in terms of population, Poland’s standing in B2C E-Commerce is in line with other emerging markets across Europe. In terms of sales, Poland was behind only Russia and Turkey in Eastern Europe in 2014 and enjoyed faster growth rates than Russia, the research results of yStats.com revealed. Sales are expected to continue rising at double digit growth rates over the next few years, with B2C E-Commerce’s share of total retail sales to grow by around one percentage point in 2015.

Online shopper penetration in Poland reached over one third of the population in 2015, but still reaches less than half of the Internet users in the country, according to yStats.com’s research findings. Online shoppers increasingly use mobile devices to browse E-Commerce websites and make purchases online, sparking M-Commerce sales which are predicted to grow at even faster rates than overall online retail sales. Another important trend is cross-border E-Commerce, with over 10% of online shoppers making purchases cross-border in 2014, from websites such as eBay, Amazon and AliExpress.

These developments are also reflected in the competitive landscape in Poland, which remains dynamic. yStats.com’s report shows that local market leader Allegro retained strong positions in 2015, while international players such as Amazon heavily invested in local distribution networks and fulfillment centers in Poland.