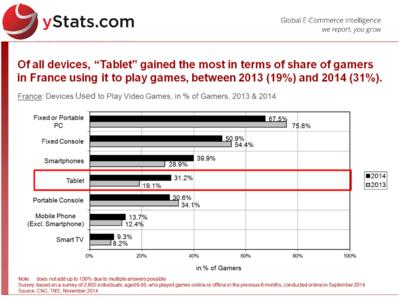 
Worldwide, mobile games are advancing their share on the total games market through rapid growth. More than a billion people worldwide played games on mobile devices last year. While smartphones are ahead in usage, revenues from games played on tablets are growing more rapidly. Another trend is distribution of mobile games from messaging app platforms, especially widespread in Asia.

In the USA, mobile gaming revenues from in-app purchases are growing much faster than from mobile game downloads. Similarly, in France free-to-enter games were most played on mobile devices. In Germany, smartphones topped computers as the device most used for game play last year and in the UK free mobile games had the highest penetration of all game types.

Mobile games are booming in other regions worldwide also. In Latin America, Mexico leads in share of smartphone users playing games on their devices, while in the Middle East & Africa, South Africa is another example of a country where mobile gaming revenues are higher than revenues from computer online games.

While the both the number of mobile games and of companies publishing mobile games are growing, the major mobile game titles are still coming from a few leading publishers, including King and Supercell. One major new development in early 2015 was strategic cooperation between video games company Nintendo and mobile games publisher DeNA. Among distributors, game app revenues on Google Play were growing faster at the end of the last year than those on the iOS App Store, while the latter performed better in terms of direct games spending.