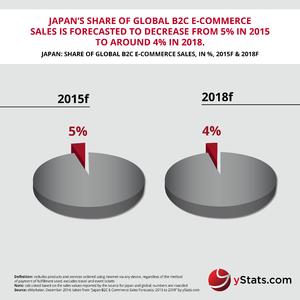 Cited by major primary research sources as the fourth biggest and also fourth most attractive B2C E-Commerce market worldwide, Japan is expected to trail China in the Asia-Pacific region in terms of B2C E-Commerce rankings, until 2018. Compared to other global market competitors, Japan is projected to rank between 4th and 7th in annual growth rate predicted for B2C E-Commerce sales from 2015 to 2018, of the top 8 markets, suggesting that China, the UK and the United States will continue to outpace Japan in sales until 2018.

Prominent trends observed among online shoppers in Japan include mobile shopping, with approximately one-third of smartphone users reportedly purchasing products online via their mobile devices as of 2014. The most popular purchased products included "Groceries", "Fashion and Apparel", "Books" and "Services", each purchased by over half of online shoppers. Pure play online retailers were by far the most popular online shopping destinations in Japan, including major players like Amazon, Rakuten Ichiba, and Yahoo! Shopping.