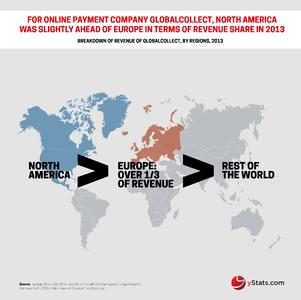 GlobalCollect is a Netherlands-based online payment solutions provider, offering payment processing, fraud screening, payment intelligence and related services. Among its clients are companies from the online travel segment, retail and E-Commerce, online gaming and digital services, such as KLM, Levi's, Avira and others. In 2014, GlobalCollect was acquired by Ingenico Group for EUR 830 million to join the company's e-payments unit.

In last few years GlobalCollect has grown substantially. In 2013 its revenue increased by more than a half to a three-digit figure in million Euros. A Latin American payment gateway Sub1, acquired by GlobalCollect, likewise increased its revenue by nearly a half. GlobalCollect also grows through partnerships and addition of new local methods. For example, in 2014 it partnered with Qiwi, a Russian payment provider, to serve the customers in Russia and CIS and became a worldwide acquirer of UnionPay, a Chinese bank card.

GlobalCollect operates in 170 countries worldwide, offering 150 local payment methods and currencies. The revenues of the company are distributed between North America, Europe and the rest of the world, with North America being slightly ahead of Europe in terms of revenue share. The payment methods supported by GlobalCollect include international and local debit and credit cards, banking methods and direct debit, such as SEPA Direct Debit, E-Wallets, such as PayPal, Skrill, CashU, and other payment methods, including cash alternatives, prepaid methods and money transfers. Among the varied local methods are for example CartaSi and PostePay in Italy, Rapipago in Argentina and Bpay in Australia.